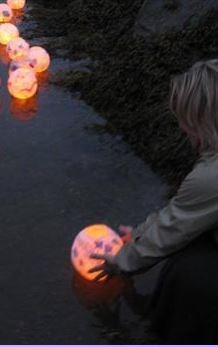 While attending the University of Missouri-St. Louis to get her MBA, Shea Morgan got into a car accident. And then she became a witch with a business plan.

Morgan's journey to witchcraft technically began when she was a little girl who felt a special connection to the earth and experienced a few psychic moments during slumber parties. But it wasn't until the 2000 car accident that she started to really study witchcraft.

"A lot of people have what they call a 'Hero's Journey,' which is really a 'healing journey,' where you have physical things that happen to you or become wrong with you and that that drives you to seek healing and pushes you further along this path," Morgan tells Daily RFT.

The car wreck caused Morgan to require extensive surgery, but she was deeply afraid of the anesthesia -- a fear not totally unwarranted, given that 7 out of every 1 million anesthesia patients worldwide die due to complications from the procedure (other studies show a much lower rate in the U.S.).

To get over her fear, Morgan took a friend's advice and saw a hypnosis specialist. The specialist was also a metaphysician who spiked Morgan's curiosity about attaining other states of mind. See also: 'Tis a Good Time to Be a Witch and Pagan; Popularity of Beliefs Growing Fast

"As I did these things, it helped me get through it. But I think more than anything it's just one of those things that takes you into a direction," she says.

Raised a Christian but unsatisfied with its limited answers to life's questions, Morgan had always been interested in other beliefs, including Buddhism, Toltec wisdom and the various forms of Christianity. So while on a business trip in Boston, it's not surprising she picked up a book on witchcraft. But she ended up sticking with witchcraft, delving deeper into the different beliefs, as well as the healing powers of shamanism.

After six years of self-study, Morgan took on several years of formal training with the Salem, New Hampshire-based Temple of Witchcraft, a 501 (c)(3) nonprofit that has a few hundred members. She has also been a regular at the St. Louis Pagan Picnic, an annual shindig of occult enthusiasts, and has written about and taught classes on witchcraft over the past year.

And now, after more than two decades working in the business world while maintaining a very serious side gig as a witch, Morgan has started her own school -- Spirit's Edge -- where she will offer in-person and online classes to people interested in learning more about witchcraft and healing. But these classes aren't going to be an episode of Charmed. If anything, they are going to be more about soul searching than casting spells.

"A lot of people like to think of witchcraft as spells and that sort of thing. And sure, that's involved with it. But I kinda look at those as just our form of prayer and, in fact, the longer you're on this path, I think the less of that type of work you do because it really is all an internal development of the soul, essentially," Morgan says.

She adds that a good portion of the instruction is about "turning inward" through journaling, meditation and learning to "go with the ebb and flow" of the world.

"The most important thing is trying to connect with the divine that's within yourself. And the way I believe it, I believe the divine runs through all things. It's outside of us and within us," Morgan says.

Although Morgan says her business training is helping to get Spirit's Edge off the ground and attract new students, she is still keeping the witchcraft side of her life separate -- and somewhat secret -- from her day job. She says it's necessary because some people hear the word "witch" and too often get the wrong idea.

"Many folks do not understand this path, as it is something many are not familiar with or even come across in their lives," Morgan explains. "In my spiritual circles and life, we use a phrase of not being 'out of the broom closet.'"

But for Morgan, that won't deter her journey.

"The best way to do anything in life and to have it be successful is to have it be aligned with your true will," she says. "I think the car accident and the surgeries happened for a reason. It helped bring me further along this path and enable me to have these experiences I've had and help other people."