Lavaughn Lewis, 23, was in critical but stable condition with gunshot wounds to the hip, thigh, back and hand after police returned gunfire during a chase, according to police. He faces one charge of first-degree robbery, one charge of first-degree assault, six counts of armed criminal action, four counts of assault on a police officer, one count of resisting arrest and one count of possessing a defaced firearm.

The chase started when an employee of a convenience store in the 2900 block of Martin Luther King Drive flagged down an officer at the nearby police substation around 5:40 p.m. to report an armed man had robbed the store.

Police saw a car matching the suspect vehicle's description nearby and attempted to stop it, according to police reports. The suspect fled, and officers followed him to the 3700 block of Palm Street, about two miles north. 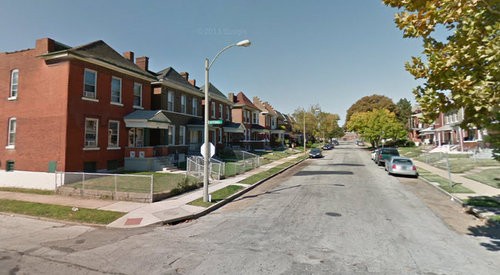 Police say Lewis then exited the car, ran a bit, turned toward the four police officers on his tail and fired. Officers fired back, striking Lewis.

Police recovered the weapon and money believed to be stolen from the store at the scene. Another officer-involved shooting on Tuesday left a suspect dead.

St. Louis County police also shot at and injured a suspect Wednesday when a man in a drug investigation pointed a handgun at detectives, according to the St. Louis Post-Dispatch.

Homicide Detectives were requested to the above location for an officer-involved shooting. Officers began investigating a robbery of a convenience store located in the 2900 block of Dr. Martin Luther King after an employee of the store flagged down an officer at Central Patrol Division. The employee reported that an armed suspect had announced a robbery, received an amount of money then fled the scene. After obtaining a description, the officers observed the suspect's vehicle in the area of the store and attempted to curb it. The suspect fled and the officers initiated a pursuit, leading them to the 3700 block of Palm, where the suspect vehicle came to a stop and the suspect exited his vehicle. As the suspect ran from the vehicle east on Palm, the officers observed he was in possession of a firearm. The suspect then turned towards the officers and fired the weapon several times at the officers. Fearing for their safety, three of the officers withdrew their department-issued firearms and fired at the suspect, striking him. The suspect was conveyed to an area hospital where he was treated for gunshot wounds to the hip, thigh, back and hand and was listed in critical/stable condition. The suspect's weapon, as well as money believed to be stolen from the store, was recovered from the scene. No officers were injured in this incident. The investigation is ongoing.