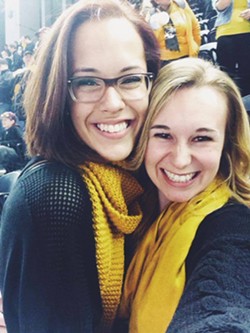 Buzz off, haters. This is Mizzou, and we are all Como-sexuals.

That was the message from the hundreds of University of Missouri students and supporters who formed a half-mile-long human chain this weekend to block campus from a homophobic protest from that one awful hate group in Kansas.

(For the non-Tigers out there: "Como-sexuals" is a reference to Columbia, Missouri, known as CoMo, where Mizzou's campus is located.)

While fourteen protesters demonstrated against him outside, Michael Sam -- whose public coming out sent shockwaves through the sports world -- joined his former teammates and a roaring crowd to accept the Tigers' trophy from the 2014 Cotton Bowl.

He tweeted thanks to his supporters, who bundled up in black and gold to show support.

Thank you for all of my Mizzou family for your support. Divided we are weak, Together we are Strong. #OneMizzou pic.twitter.com/SMAPZHk2hX

Two Mizzou sophomores, Kelaney Lakers and Alix Carruth, organized the counterprotest to give students, faculty and former football players a way to respond peacefully to the WBC.

"Our hope is for the wall to reflect a unified student body and symbolize a display of love towards our own tiger, Michael Sam," Lakers and Carruth said in a statement before the demonstration. "We're humbled and a bit overwhelmed by the community's response. This issue is so much bigger than either of us, and we want to do justice to Michael Sam and show him that Mizzou loves him."

Photos and videos of the protest show hundreds of students dressed in Mizzou colors with their backs turned to the small group of protesters.

Continue reading for photos and video of the half-mile human chain. Hundreds of students and supporters turned out for the counter-demonstration this weekend against the hate group protesting Michael Sam's recent coming out.

Students were bundled up but decked out in black and gold. #StandWithSam pic.twitter.com/3uQehQeD5P

The line of Mizzou students stretched from Providence to nearly Champions Drive at its peak. #StandWithSam pic.twitter.com/m0srK0Hk2X