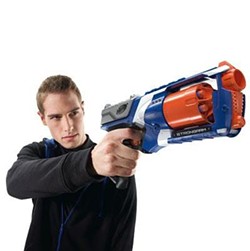 As a black SUV slowly pulled into the drive-through of the Lion's Choice in Fenton, the cashier at the window had no idea of the danger that was about to occur.

The driver, with menace on his mind, slowly put on the brakes as his girlfriend aimed her gun.

The cashier, still unaware of the weapon-toting passenger, opened the service window to take the customers' order. And then it happened...

A piece of yellow sponge violently pummeled into her shoulder. And after a momentary shock wore off, she realized that she had just been the victim of a Nerf gun drive-by shooting.

Fortunately, the cashier did not sustain any injuries as a result of the synthetic-material ambush.

The black SUV peeled out of the Fenton Lion's Choice, but the sponge-dart snipers didn't get away -- the Nerf assault was caught on video.

After being informed of the incident on Tuesday, February 10, the St. Louis County Police Department investigated the case, and on Thursday, they found their suspects: 26-year-old Mark Applebaum, the alleged driver; and 22-year-old Stephanie Winkler, the alleged gunwoman.

Click for info on the investigation and a video of the shooting...

Applebaum and Winkler were charged with third-degree assault for the tube-shaped polyurethane strike.

"They didn't intend to hurt this person," says Schellman, "but any time you put the victim in reasonable fear, that can be construed, by Missouri State statute, as 'assault.'"

The suspected Nerf gun markswoman and getaway driver each face up to fifteen days in the county jail and a fine of up to $300.

Daily RFT is working to confirm if the suspects were influenced by the wave of violent Nerf gun battle videos that have swept the Internet in recent years, such as this one:

We'll update when we do.