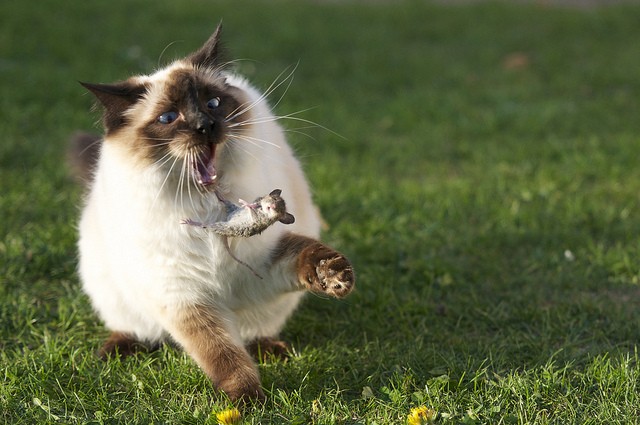 Electricity, not curiosity, killed this cat.

More than 1,500 houses in Jefferson County lost power Monday night when a cat chasing a mouse crossed a high voltage line, leading to an outage at a substation.

"A supervisor said the cat had the mouse in its grasp," says Ameren spokesman Kent Martin.

The kamikaze kitty caused the longest power outage this winter, leaving hundreds of families without power from around 6:30 p.m. Monday to early Tuesday morning.

That long of an outage can be dangerous in weather this cold; the temperature dropped from 10 degrees down to zero, then climbed back up to 8 degrees while Ameren tried to turn the power back on, according to the National Weather Service.

"Sometimes, nature takes back," Martin tells Daily RFT. Squirrels are more commonly the culprit behind animal-related outages, but Ameren also puts down snake repellent to keep the reptiles from slithering across grounded lines.

"In this case, it was a poor cat" and its mousey prey, Martin says.

Talk about the power of the pussy.