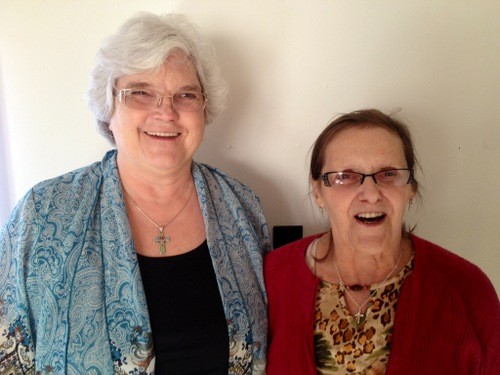 A 65-year-old woman says she's writing to Pope Francis for help after her priest banned her from taking Communion at her mother's funeral.

Carol Parker and her partner of twenty years, Josephine Martin, say that even after twelve years of attending Mass and taking Communion, it wasn't until their priest at the Saint Columban Catholic Church in Chillicothe saw Baker's mother's obituary that he banned them. The obituary mentions that Baker's mother is survived by a daughter and her daughter's partner.

"We were in the choir. We were lectors. Now, we don't have a church in town," Martin tells Daily RFT. "We were planning on being buried there with her, but I guess that's not going to happen now."

Only members in good standing within the Catholic Church are allowed to take Communion, a ceremony where Catholics believe God transforms wine and wafers into the actual blood and body of Jesus. Parker says her priest called her and said she couldn't take Communion anymore -- not even at her mother's funeral -- but she could receive a blessing from him.

"I don't need his blessing," Parker says. "I really don't. I don't want a blessing from someone who is so biased and not open to the congregation."

The couple has vowed to find another church, but as one last long shot, they're asking Pope Francis for help.

"He's such a breath of fresh air for everybody," Parker says of the new pope, who made international headlines recently for asking "Who am I to judge?" in response to a question about gay couples. "He's open to everyone. He wants the Church to be inclusive."

Parker and Martin are both diagnosed with multiple sclerosis and met at a group for people with the disease. They tried to get married in California in 1998, but protesters caused the ceremony to get called off.

The couple moved to Missouri to be with family, especially Parker's aging mother, who died in December. Parker says her mother would have wanted the couple to worship at her funeral, including taking Communion.

"Mom was pretty open about things," Parker says. "I think the fact that I finally found someone, she was just happy about that. She accepted [Martin] into the family."

Parker and in are on the hunt for a new church, and they think they've found one ten minutes away in Hamilton. Their former priest refuses questions from the couple or from reporters.

The couple says they wouldn't have changed Parker's mother's obituary even if they would have known it would cost them their church.

"I said [to Parker], 'Could you have worded it a different way? You could have left me out, and everything would have been fine,'" says Martin, who is referenced as Parker's partner in the obituary. "But she didn't because I've been taking care of her. No one thought this would happen."