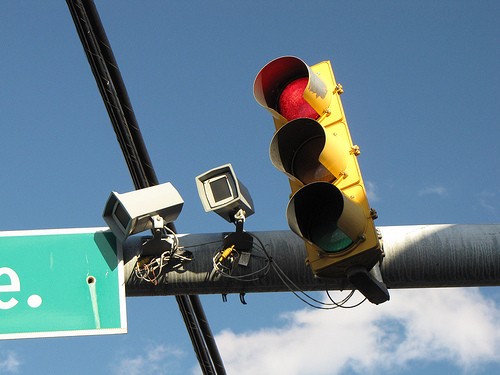 In other words: A judge says St. Louis can't make you pay your red light camera tickets, for now.

Update, Noon: The city of St. Louis says it will appeal the judge's ruling and may go to legislators for a state-wide law on red light cameras.

Ohmer's judgement is the latest in a series of Missouri court decisions trending away from the use of cameras, but the patchwork of contrasting laws means the final decision will probably be up to the state Supreme Court.

Missouri courts have recently ruled that red-light cameras violate the state constitution because they punish the owner, not necessarily the driver, of the car, in cases out of Arnold, Ellisville, Kansas City, Creve Coeur and Hazelwood.

"Red light safety cameras save lives and are a proven, effective tool that is changing driver behavior in the City of St. Louis," says St. Louis Metropolitan Police Chief Sam Dotson. "At some of the earliest intersections to install cameras, citations are down more than 80 percent. According to the Missouri State Highway Patrol, from 2010 - 2012, total traffic fatalities in the City of St. Louis dropped 19 percent and total crashes have dropped 12 percent."

In 2012, a deadly crash caught by a red light camera helped law enforcement solve an outstanding murder. The city says there are 150 cases where police have requested video from red light cameras to assist in investigations.

Continue to read the judge's decision.