A band of teenagers racked up a lifetime's worth of charges while driving in their south-city neighborhood shooting and robbing Sunday night, according to police.

St. Louis Metropolitan Police arrested four teens -- ranging in age from 14 to 18 -- after spotting their car just miles from a drive-by shooting that sent a 29-year-old woman to the hospital.

Their gray van matched the victim's description of her attackers, and investigators found two guns inside, police said.

Police were able to pin three additional crimes on the teens based on their investigation: a shooting into an empty house in the 7000 block of Trainor Court, a robbery in the 3600 block of Neosho Street and property damage at Keokuk Street and Spring Avenue.

Here are the teens and their charges, according to police: 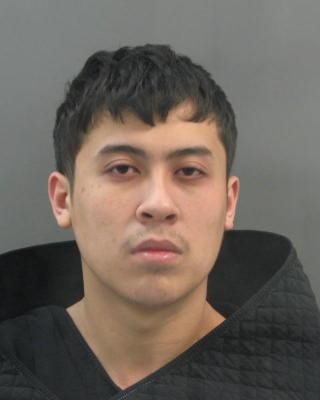 Jayven Moose, 18, of the 6100 block of Virginia Avenue, faces eight counts of armed criminal action and eight counts of shooting a firearm from a car at a person, car or building.

Another 14-year-old suspect is in the custody of juvenile authorities.

Continue reading for the original crime report and another mug shot from police.

Here's the original report from police:

While responding to this incident, officers observed the vehicle described by the victim traveling west on Loughborough. After investigating the vehicle and its occupants, it was determined that they were responsible for the above incident. Investigation revealed the four suspects were also responsible for a Robbery 1st in the 3600 block of Neosho, Property Damage at Keokuk and Spring and an additional Assault 1st/Shots Fired Into A Dwelling in which no one was injured in the 7000 block of Trainor Court, all of which occurred on the night of 2/9/14.

All four suspects were taken into custody and two guns were recovered from the vehicle. The investigation is ongoing.