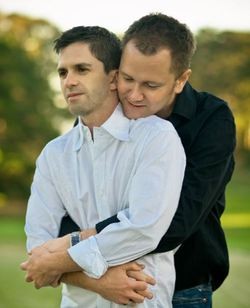 See update below: The American Civil Liberties Union of Missouri is suing the state over its decade-old constitutional ban on gay marriage.

Following in the footsteps of overturned same-sex marriage bans in Oklahoma and Utah, the organization filed suit this afternoon in a Kansas City court on behalf of eight Missouri couples. All eight are legally married in other states.

Alan Ziegler, 42, and LeRoy Fitzwater, 43, were married in California in 2008 and moved to St. Louis in November. They are named as plaintiffs in the lawsuit.

"We moved from California to Missouri knowing that essentially we'd be divorced when we got here," says Ziegler. "When our parents travel from state to state, no one questions their marriage. We want our marriage protected like our parents' marriage."

Ziegler and Fitzwater are new to living in a state that doesn't consider them married. They haven't yet undertaken the expensive effort to collect legal documents -- power of attorney, living will and many others -- to prove their relationship exists.

"We shouldn't have to carry the papers with us to prove we are married," says Ziegler. He recalls that just a few weeks before moving to Missouri, his husband had to undergo an emergency appendectomy in California.

California is among the seventeen other states that recognize same-sex marriage.

"I was able to go in with him to the ER, talk with his doctor and Alan through it," he says. "In Missouri I wouldn't be allowed in. I would just be some guy who dropped him off."

Same-sex couples in Missouri have limited recourse if a partner becomes seriously ill or dies. In October, reams of evidence testifying to the relationship between a killed Missouri Highway Patrol trooper and his partner failed to sway the Missouri Supreme Court, which denied death benefits to the trooper's male partner of fifteen years. The reason? They weren't legally married in the state.

Despite possessing power of attorney and a living will, another plaintiff couple, St. Louis residents Julikka LaChe, 33, and Beth Drouant, 35, are scared of what would happen to them in a medical emergency.

"Even with those safety nets, there's no guarantee," says LaChe, describing the patchwork legal strategy of accumulating legal documentation in lieu of a marriage certificate.

"The rights that come along with being married number in the hundreds," Barbara Gilchrist, director of legal clinics at Saint Louis University Law School, told Daily RFT in November. "It's just not possible to re-create that in an alternative way."

The ACLU's lawsuit comes at a heady time for the LGBT community in Missouri. In his January 21 State of the State address, Governor Jay Nixon called for new measures to protect LGBT individuals from workplace discrimination.

As we reported on Monday, Republican state Representative Nick Marshall has filed to impeach Nixon for allowing gay couples legally married in other states to file joint income taxes.

Before news of the ACLU's lawsuit broke, the most exciting LGBT development this week was doubtlessly former Mizzou defensive end Michael Sam, who came out to the New York Times and ESPN as the first openly gay NFL prospect in the league's history.

Updated 12:20 p.m.: At a press conference this morning, ACLU legal director Tony Rothert clarified that the lawsuit seeks recognition in Missouri for couples legally married in other states -- that is, a win wouldn't immediately open the doors for Missouri to begin issuing marriage licenses to same-sex couples in the state.

However, Rothert tells Daily RFT that this lawsuit will force the state to defend its constitutional ban in court.

"We really don't know what the state's justification is at this point for maintaining the amendment. Frankly we don't think they have one," he says, citing United States v. Windsor, the landmark 2013 United States Supreme Court decision that ruled restricting the federal definition of "marriage" to apply only to heterosexual unions violated the equal protection clause of the U.S. Constitution.

"This is a progression that's followed in many other states," Rothert adds. He points out that states like New York recognized out-of-state gay marriages before it began issuing marriage certificates to its own citizens, and Illinois and Hawaii enacted civil unions before enacting state-sanctioned marriages.

"This is all happening very quickly," Rothert says. "We look forward to seeing what the state has to say."