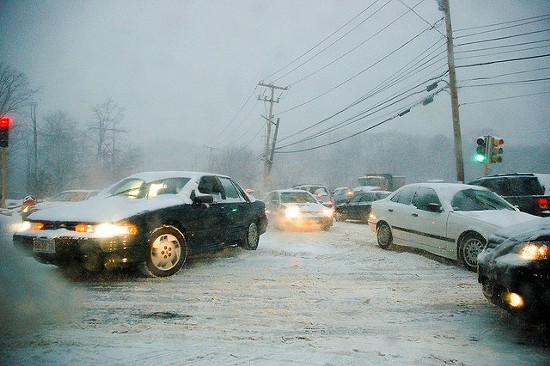 Last week's snow storm killed two Missourians in car crashes and left thousands across the state stranded and in need of help, according to the Missouri Highway Patrol.

Troopers responded to 1,054 crashes -- including 96 injuries and two fatalities -- across Missouri during the storm on February 4 and 5, the highway patrol says. On a typical day, there are only about 100 crashes.

But it wasn't just collisions that put motorists in danger. Troopers also answered more than 3,000 calls for assistance during those two days, helping broken-down cars, vehicles that slid off the road and abandoned cars blocking snow removal.

Temperatures could crawl up above freezing by the end of this week, but for now, lows are still hovering around zero degrees.

"It is dangerously cold outside, and winter isn't finished with Missouri quite yet," says Colonel Ron Replogle, superintendent of the Missouri State Highway Patrol. "On those days where snow or ice make travel treacherous, I strongly encourage you to stay home if at all possible."

For travelers braving the slippery winter weather to come, the highway patrol suggests keeping a cell phone, bottled water and snacks in the car, as well as emergency items, such as tire chains, battery booster cables, blankets and a bag of sand or kitty litter. Keep the gas tank at least half full.

If your vehicle slides off the road, stay with it, says highway patrol.