Grown Ups-Only Blanket Fort Contest Is Like Reliving Childhood, But With Beer 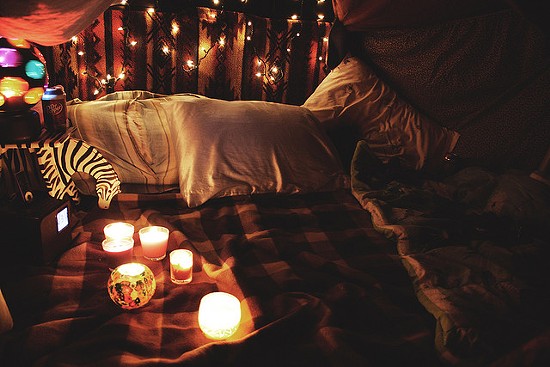 Calling the young at heart!

The Blind Tiger in Maplewood is hosting its first-ever grownups-only blanket-fort contest Wednesday, complete with PJs, pizza and beer.

"Who knew that adults wanted to build blanket forts so badly?" says Katy Romine, events manager at the Maplewood restaurant. "It's competitive!"

The Blind Tiger only has room for twelve forts, so competitors may need to claim their real estate early. Four-person teams are allowed to use blankets, chairs, sheets, boxes, poles, cushions, tape and string to build in six-foot-by-seven-foot rectangles in just one hour.

A five-member panel of judges -- including Kenny Snarzyk, the man behind the band Fister and Riverfront Times' pick for best bassist in 2012 -- will decide which team wins a $100 gift card to Blind Tiger. Romine says she's keeping the criteria for judging top secret.

Romine says she mentioned the idea of a blanket-fort contest only half-seriously to some regulars, and the idea just took off. Four Hands Brewery wanted to get involved, so the $10-per-head ticket price now comes with a beer.

"This could be a nightmare, but it could also be so much fun," Romine says.

The building starts at 9 p.m. Wednesday, but the Blind Tiger opens at 6 p.m. for anyone who wants to claim a spot for their fort. Tickets go on sale at 6 p.m. Wednesday.