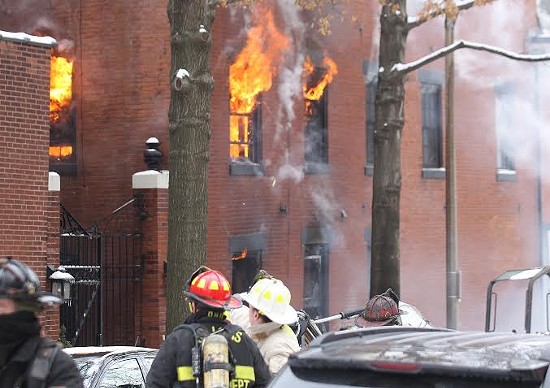 Firefighters battled a two alarm fire in 18 degree weather Wednesday when a crew struck a gas line, causing a leak that turned into an explosion.

No one was injured, but witness say that might not have been the case if the St. Louis Fire Department hadn't evacuated the building minutes before it exploded.

Four Winds Construction, contracting for AT&T, struck a gas line after 1 p.m. while installing fiber optic cable for the Stars Design Group, a St. Louis clothing company based in a three-story brick building at the intersection of Shenandoah Avenue and Menard Street.

When workers started smelling gas, they called 911. The fire department cleared the building, and the clothing company's 11 employees say they barely made it out before the explosions.

Azem Dullovi, 29, says he was thrown back several feet by the explosion, according to the St. Louis Post Dispatch. He hurt his back and said he was suffering irritation in his throat and nose from the fire and smoke.

"I could have been dead," he told the Post-Dispatch.