"Sources described the effect of the speech as 'intimidating' with the audience caught in moments of awkward silence looking at their hands in their laps," says the CBS affiliate.

Unless a "47 percent"-type tape emerges from the meeting, there's no way to verify what Dooley did or didn't say. (We're as disappointed as you are.)

But the accusations seem odd since Dooley is infamous in political circles for speaking extremely candidly, including unleashing expletives or telling off a political rival. Just last month, he erupted at a meeting and accused a councilman of purposefully insulting him by rejecting his choice for a scandal-plagued public commission.

"Anybody who knows Charlie Dooley already knows how animated he is," says Pat Washington, Dooley's spokeswoman. Washington attended last week's meeting, comparing it to a pep rally or a pre-game locker room speech intended to pump up the team before the August primary.

"I don't know what agenda or imagination those [KMOX] sources were using," Washington tells Daily RFT. "Charlie Dooley was not the only one who hurled a few expletives. There were quite a few folks who were very, very animated and colorful."

The potential problem behind Dooley's comments comes down to the "lug," St. Louis' term for the good ol' boy bribe that political appointees donated to keep their politician-bosses happy.

During his speech, Dooley asked the crowd to donate one percent of their salaries to his reelection campaign. Requiring a donation in exchange for keeping a political job is illegal, but Washington says that's not even close to what was going on. 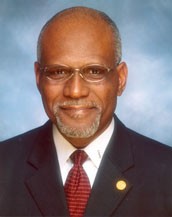 "There are people there who were ready to make their contribution," Washington says. "I had my check."

An audience member asked how much they should donate to Dooley's campaign since the first quarter ends next month, Washington says. Dooley's campaign manager responded that one percent was traditional, and Gary Earls, Dooley's chief operating officer, added attendees could round that number up or down.

"Someone said, 'Round it up!'" Washington remembers. "It was really kind of a funny moment."

Not everyone found it hilarious. KMOX's unnamed sources said they felt intimidated. "[KMOX] made it sound like people were being led into this dungeon and tied to the wall and flogged until they gave up company secrets and their wallet," Washington says.

The Missouri Ethics Commission probably won't investigate Dooley for demanding the lug from his supporters unless someone files a complaint, according to the St. Louis Post-Dispatch. As long as Dooley's fundraising speech was a request -- not a requirement -- it's legal.

If anything, this story promises an exciting and drama-filled election season ahead.

"People really need to know the facts," Washington says. "You have one faction or another knowing that they can capitalize on fear and frustration with a bunch of hyperbole, and the media will aid in that."