How the Supreme Court Makes Last-Minute Decisions on Missouri Executions

Three times in three months, last-minute appeals over the execution of a Missouri prisoner have made their way up to the U.S. Supreme Court.

Each time, justices allowed Missouri to continue with the executions despite lawyers' claims that the state's new lethal injection drug -- which comes from unregulated, unnamed pharmacies -- counts as cruel and unusual punishment.

The Supreme Court delayed last week's execution of Herbert Smulls, who killed a man while robbing a Chesterfield jewelry store, by 22 hours when Justice Samuel Alito stayed the execution with less than three hours to go. The court deliberated executing Joseph Franklin, the serial killer who put a bullet in Larry Flynt's spine, until 5:20 a.m. in November, and all nine justices voted on the execution of Allen Nicklasson, who killed a man trying to help him on the side of the road.

See also: 5 Reasons Missouri Should Use the Guillotine, Not Lethal Injection

The legal system typically applies a higher level of scrutiny to capital cases, but Missouri's new lethal injection drug is prompting more appeals from death-row. Since the drug is not regulated by the FDA and comes from unnamed pharmacies out-of-state, lawyers asked the court to delay executions until they could prove the drug constitutes cruel and unusual punishment.

So how does it work? How do the Supreme Court justices know when they'll need to rule on an execution in Missouri? Are they really wearing their robes, sitting in a chamber until the wee hours of the morning making their rulings?

Here's what we learned from the Supreme Court about last-minute stays of execution: 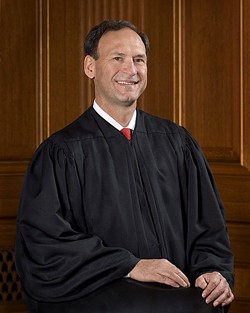 The Supreme Court breaks the country down into 13 groups -- nationwide cases, Washington D.C. and eleven other federal circuits -- and assigns each group it's own Supreme Court justice. Justice Samuel Alito is the assigned justice for Missouri and six other Midwestern states.

Each week, the court's clerk distributes a list of the scheduled executions. That means Alito knows ahead of time that a Missouri execution case could pop up at any time that week, day or night.

If an appeal makes it up to the Supreme Court, it can deny the motion without comment or grant it, typically with a very strict timetable. Alito can make that decision himself if he thinks four more justices would agree with him, or he can call in the other eight justices, who talk on the phone or through their law clerks, not typically in person, to make a final decision.

If Alito isn't around, the decision goes to Sonia Sotomayor, then follows the Supreme Court hierarchy.

Executions are always scheduled for 12:01 a.m. so the court has the entire day to make a final decision before the 24-hour execution permit expires.

So when the next time a Missouri execution means an all-night wait on the Supreme Court, remember they aren't in full robes (and powdered wigs, which they never wear but we like to imagine.) More likely, they're gabbing on the phone wearing PJs and their hair in curlers.