The flag with a red field, a fleur-de-lis and blue waves representing the confluence of the Mississippi and Missouri rivers has been flying atop city buildings and flag poles for half a century now. The flag's birthday is only a couple weeks before St. Louis'. The city turns 250 on Valentine's Day weekend.

The St. Louis flag is beloved by its city, unlike the Missouri flag, which got a makeover last year from a design firm in the Northeast.

"St. Louis pride runs deep in this town, so it makes sense that many fly the flag. I share that pride, but I believe there's another reason the flag is so popular: It looks really, really good," says Cameron Collins, the author behind Distilled History, a blog that mixes history and cocktails (and won the 2013 Riverfront Times web award.)

"Unless you live in the United Kingdom or maybe Bhutan, I think the St. Louis flag is better than yours."

St. Louisans aren't the only ones who like it. The flag won fifth place in a 2004 poll of the best flags in the world.

St. Louis needed a new flag 50 years ago when city officials realized they'd made a big oversight. After choosing a different design everyone agreed was ugly-but-good-enough, officials took a Mississippi riverboat cruise to celebrate -- and forgot to make their chosen flag official, Collins says. 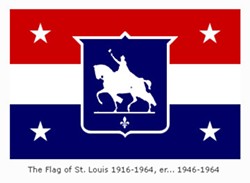 Thirty years later, city hall caught the mistake and passed an ordinance to fix it, but the cat was out of the bag: No one really liked the newly official flag design. Famous St. Louis architect Charles Nagel called the striped flag with St. Louis on his horse "wretchedly bad in heraldic design." Even the St. Louis Post-Dispatch got behind the idea of a new flag in a 1957 editorial.

Nagel called on Theodore Sizer, who'd been an art professor at Yale University, and he designed the flag St. Louisans know and love today.

Here's the official city description of the flag's symbols:

The flag with a solid red background has two broad heraldic wavy bars, colored blue and white, extending from the left top and bottom corners toward left center where they join and continue as one to the center right edge. This symbolizes the confluence of the Missouri and Mississippi rivers. Over the point of confluence a round golden disk upon which is the fleur-de-lis of France (blue) calling attention to the French background of the early city and more particularly to St. Louis of France for whom the City is named. The golden disk represents the City and/or the Louisiana Purchase. (Heraldically, the disk is a "bezant" or Byzantine coin signifying, money or simply purchase.) The flag's colors recall those of Spain (red and yellow or gold), Bourbon France (white and gold), Napoleonic and Republican France (blue, white and red), and the United States of America (red, white, and blue).

So happy birthday to the St. Louis flag, even all the way down at the bottom of the world: