13 Ways to High-Five: Which One Should Congress Make Missouri's Official Greeting? 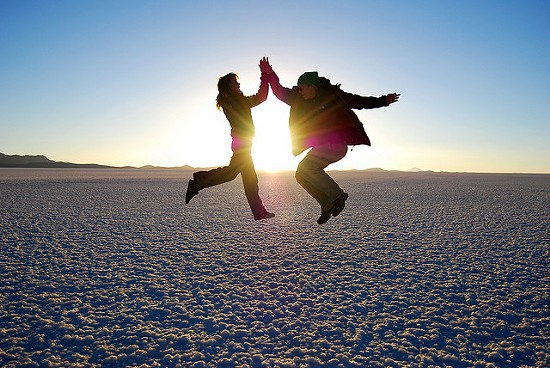 People are fed up with the bipartisan rancor that colors our politics, but Missouri Representative Courtney Allen Curtis has a solution that's so simple it's downright genius:

Curtis loves to high-five. He does it all the time at the Missouri Legislature, where being chair of the Bipartisan Freshman Issues Committee means he works with politicians on both sides of the aisle.

And now, he's sponsored House Bill 1624, which would make high-fives the official greeting of Missouri.

"Things can get kind of tense because passions are ignited on both sides, and you need something to break it up and bring us together," Curtis, a Democrat representing Berkeley, told Daily RFT. "I walk around on the floor high-fiving people. It allows us to bond in a unique way."

Why a high-five and not, say, a fist bump? "I don't think there's anything threatening about a high-five," he says.

Curtis' measure will likely be ignored by the Republican-dominated house, but he stays optimistic.

"We will need something to bring us together," he says.

Even if Curtis' bill goes down in flames, we think he's on to something. Here are thirteen other greetings Missouri should consider for its official greeting:

Also known as the windmill.

It's fun, it's musical and you don't share any germs.

Nine more amazing gifs of greetings on the next page! The Predator Strongarm

Don't forget to look deeply into the other person's eyes as you clutch their fist for an unnecessarily long time.

Simple enough that anyone can do it.

End your greeting with a quick lean-back.

No one goes back on a pinky promise. No one.

Who needs hands when you can headbutt?

Continue reading for more nominees for the official Missouri greeting. A Punch in the Face

This is the most painful option, but we can't stop watching this guy's jaw.

Monta Ellis shows some complicated choreography in this handshake.

Just keep slapping until one of you stops.