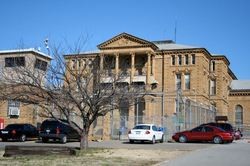 A hunger strike by several inmates at the Menard Correctional Center in Illinois is entering its third week today as they continue to protest against being held in the prison's severe "administrative detention" unit, which has conditions similar to solitary confinement, for what they claim are unjustifiable reasons.

The protest originally started with fourteen inmates. But that number has decreased to eleven, according to Illinois Department of Corrections spokesman Tom Schaer, who says the prison has medical staff monitoring the striking inmates daily.

The inmates claim they have not been told why they are being held in Menard's AD unit. They also claim to have not been told what they can do to get out of the unit and back into general population. According to writer and activist Staughton Lynd, who has been in contact with the inmates through letters and a third party, such detention is against the law.

See also: Locked-Up in "High Security Unit" and Not Told Why, Prisoners Hunger Strike for Answer

Inmates being held in the segregation units are limited to five hours of exercise per week, one phone call per month, all meals must be eaten inside their cell, no-contact visits, and "limited movement in general," according to Schaer.

Being held in such conditions requires due process, Lynd says, and the inmates decision to go on hunger strike is their best course of action given the circumstances.

"What the prisoners are doing is justified; what the prison is doing is unconstitutional and is a violation of what was ordered by the U.S. Supreme Court," Lynd says.

However, the IDOC insists the inmates have been given adequate information about their detention and what they need to do to get out.

"The allegations are false," says Schaer. "The prisoners striking have been told why they're there and have been given the appropriate information."

During the two weeks of the hunger strike, the prison continues to deny all of the inmates' accusations, which have included inadequate heat and no access to mental-health professionals, in addition to the claims that they have not been told why they have been placed in the extra-confinement units.

One of the striking inmates says the prison is punishing him for his prison activism and that his prolonged detention in solitary-like conditions is "retaliation" for his work.

Joseph Hauschild, one of the inmates on hunger strike, says in a letter to the Uptown People's Law Center in Chicago that he has been placed in the AD unit for "retaliation" for his prison activism.

After being released into the general population of the prison in August 2012 after a prolonged stay in an extra-confinement unit, Hauschild writes: "I was immediately harassed and retaliated against by prison staff because of my grievances and litigation and ended up being set up and written four fraudulent tickets. Three of the tickets I beat and were expunged off my record, and one ticket I was found guilty and is currently on appeal."

In order to get placed in the administrative detention unit, an inmate needs to have "broken a rule," says Schaer, but that's not limited to acts of violence; inmates can be placed in AD for vandalism or insubordination. Schaer says he is unauthorized to comment on the reasons for the striking inmates' placement in the AD or segregation units.

Lynd says that the prison has "vaguely hinted" at beginning proceedings to discuss why the inmates have been placed in the extra-confinement units, but nothing formal has begun. He also says that the inmates were allowed two of their smaller demands: more cleaning supplies and individual coats.

But Schear denies any talks have begun or demands were met. Rather, he says, the prison has begun documenting when cleaning supplies are handed out and the extra coats handed to a few of the inmates was an individual act by a prison employee, not a decision made by the prison. He adds that there were already enough coats for each inmate, but they are sometimes get shared because coats aren't allowed in cells.

Although it appears to be the prison's word versus the inmates', one thing is clear: Two weeks without food is dangerous. According to this, the decomposition phase sets in after ten days. Muscle mass deteriorates, lethargy and confusion set in, and "if no food is consumed then a critical accumulation of toxic components of metabolism substances builds up, leading to death from liver and kidney damage and brain toxins."

California inmates who were detained in similar solitary-like conditions made headlines last year when they went on a mass hunger strike for two months. It initially began with 30,000 inmates refusing to eat and ended with 10 inmates. Scores were hospitalized for malnutrition during the course of the strike.