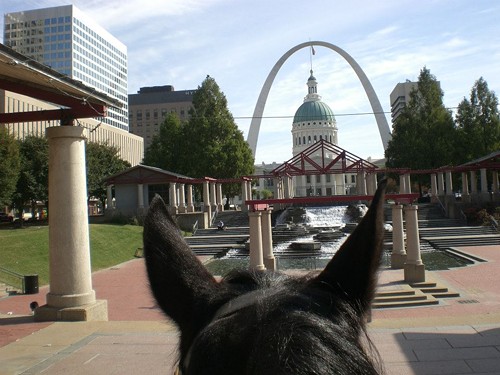 Thomas Stritzel, who used to lead the St. Louis park rangers, was sentenced Monday to serve three years in jail and to repay the $472,722 he and a partner stole from the city.

Stritzel and Vacca embezzled the money from January 2005 to December 2012 to pay personal credit-card charges, buy cars and fuel and fund other personal living expenses unrelated to the parks department.

"Taxpayers were slapped in the face when roughly half a million dollars was allegedly embezzled from City of St. Louis funds allocated to the parks department," Dean Bryant, head of the FBI's St. Louis office, said when the men were indicted. "The cooperation from the City of St. Louis enabled the FBI to uncover the multiple fraudulent schemes."

The two city employees were quickly removed from their official roles and turned themselves in to the FBI as charges surfaced last year. When Stritzel and Vacca were first arrested, St. Louis spokeswoman Maggie Crane told Daily RFT that if the charges were true, "they deserve everything they get for betraying the public trust."

Crane also said she hoped the sentencing would include a full restitution of the stolen funds to the city of St. Louis. She got her wish: Both men received only 36 months out of a maximum of twenty years, but United States District Judge Carol E. Jackson fined them each $472,722, the amount stolen from the city over seven years.

"We'll be looking at how this happened to minimize any risk of it ever happening again," Crane says.

Continue reading for the full indictment.