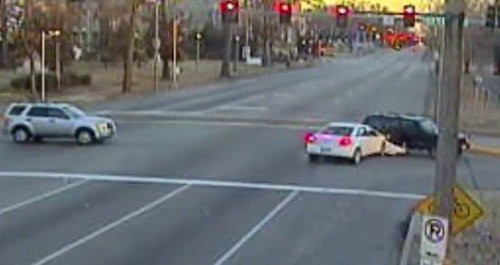 American Traffic Solutions released new statistics on the efficacy of red light cameras along with the video:

[T]the analysis found that fewer and fewer vehicles are being issued multiple violations. Eighty four percent (84%) of the vehicle owners who received and paid one red-light running citation since the program started in May 2007 never received another citation Similarly, in the six years since cameras were first installed, the average number of citations issued per camera per month citywide has decreased by nearly 60 percent despite new cameras being installed.

2013 was a confusing year for red-light camera rules. In Ellisville, Arnold, Florissant and St. Peters, judges dismissed cases involving the cameras because red light tickets don't add penalty points to a driver's licence, but cities like Creve Coeur and St. Louis are still using the cameras.

"Now we have a conflict within the court, which is extremely rare and causes confusion," says Jane Dueker, attorney for ATS.

The issue could land before the Missouri Supreme Court for a final ruling.

Click to the next page for three more years worth of red light camera videos of car crashes in St. Louis.