Missouri has a lot of state things: a state bird (bluebird,) a state instrument (the fiddle,) a state fossil (Crinoidea) and even a state dessert (the ice cream cone.)

A bill before the Missouri Legislature would name Old Drum, a dog that died in the 1800s, as the historical dog of Missouri and Jim the Wonder Dog as Missouri's state wonder dog.

So gather 'round, Daily RFT readers, and let us tell you the story of two historic Missouri dogs.

Old Drum, a black and tan hound, became famous in Missouri only after its murder.

On the night of October 28, 1869, just when families were getting back to the routine of raising crops and livestock after years of plundering and raids during the Civil War, rancher Leonidas Hornsby asked his nephew to shoot a dog on his property.

Dogs and wolves had been decimating his sheep, and Hornsby vowed to kill the next hound on his property, according to Missouri state archives.

That hound was Old Drum, the beloved hunting dog of his brother-in-law Charles Burden. Burden was devastated to find his dog dead, full of lead with its head in a nearby creek, and he vowed revenge, telling Hornsby, "I'll have satisfaction at the cost of my life."

Burden took Hornsby to trial, but he wasn't very successful. There just wasn't enough evidence for an easy conviction, especially since Hornsby didn't pull the trigger.

At the fourth trial in Warrensburg, Burden's lawyer George G. Vest won the case with an epic, heart-wrenching eulogy not just for Old Drum but for man's best friend. The speech wasn't written down until after the trial, so only a small portion remains:

Gentleman of the Jury, a man's dog stands by him in prosperity and in poverty, in health and in sickness. He will sleep on the cold ground, where the wintry winds blow and the snow drives fiercely, if only he may be near his master's side. He will kiss the hand that has no food to offer, he will lick the wounds and the sores that come in encounters with the roughness of the world. He guards the sleep of his pauper master as if he were a prince. When all other friends desert, he remains. (Read the entire remaining speech on the third page of this story.)

Folks who remember Jim, the Llwewllyn setter born to pureblood champion stock in Louisiana, say he was psychic.

Sam VanArsdale, a hotel owner in Marshall in the 1920s and 30s, bought Jim on discount because he was the runt of his litter. The joke is on the original owner, because Jim was a talented hunter. VanArsdale stopped counting after Jim hunted his 5,000th quail, leading Outdoor Life Magazine to call him the hunting dog of the country. 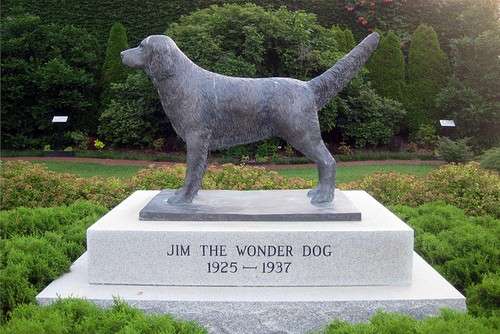 But Jim's talents went far beyond hunting. He could follow explicit commands in a number of languages, including Morse Code, say witnesses. He could locate a car by make, color, out-of-state plates or a license number. He predicted the winner of seven Kentucky Derbies, the 1936 World Series and the sexes of numerous unborn children.

When Jim died in 1937, he was buried in Marshall's Ridge Park Cemetery, where he's now the only animal in the all-people graveyard.

And here's the Old Drum speech:

Eulogy of the Dog