250 Jobs Up for Grabs at St. Louis Cardinals' Ballpark Village

Despite the fresh snowfall, hundreds of people turned out to apply for one of the 250 jobs created by the brand new Ballpark Village next to Busch Stadium.

The Cardinals will need new staff to work at the 10-acre baseball fan base, which spans seven city blocks. Most of those jobs are food industry based -- bartenders, servers, hosts -- to work at the development's multiple restaurants, including the two-story Cardinals Nation restaurant, the Fox Sports Midwest Live! Marketplace, the PBR St Louis Cowboy Bar, the dueling piano bar chain and even a Ted Drewes.

The Cardinals Nation restaurant will be one of the largest in the city, with more than 500 seats and an additional 300 outside seats on game day.

Applicants have three more dates to attend the open-call job fair: February 4, 18 and March 4. Hiring managers will meet-and-greet with applicants from 10 a.m. to 5 p.m. at the SLATE Missouri Career Center, 1520 Market Street, before deciding whom to bring back for interviews.

The Ballpark Village project has been plagued with delays and setbacks for years, but organizers say they'll be ready for opening day this year. 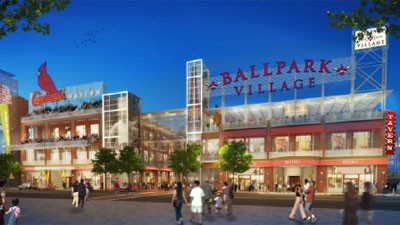 For months, the only sign of progress at the Ballpark Village was a parking lot with 400 spots costing $20 each. Alderman Scott Oglivie argued against tax subsidies for the project earlier this year, saying bars and concrete slabs weren't valuable enough to the city to earn tax-increment financing.

But the project's leaders say now that the lights are on and the construction is finishing up, baseball fans will see what all the fuss has been about.

"From a baseball industry or sports industry perspective it's going to be a one-of-a-kind development," Ron Watermon, spokesman for the Cardinals, told Daily RFT in August just after the parking lot was completed. "The ballpark was built the way it was built to make Ballpark Village a reality. The design will all make sense when this first phase opens."

Here's a list of the open jobs at the Ballpark Village.