2014 State of the State: Nixon Calls to End LGBT Discrimination in the Workplace 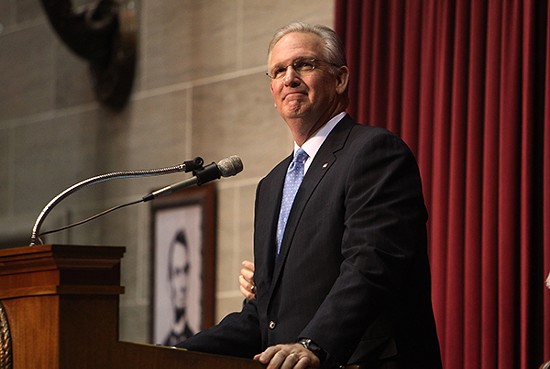 Missouri law protects workers from unfair treatment based on race, color, religion, national origin, ancestry, sex, age or disability. Last year, for the first time ever, the Missouri Senate passed a bill to add sexual orientation and gender identity to the list of protected identities.

But the clock ran out on the legislative session before the House could cast their votes.

"We need to end discrimination against LGBT Missourians in the workplace," Nixon said during the speech. "No Missourian should be fired because of who they are or who they love. Last year, the Missouri Nondiscrimination Act passed the Senate with bipartisan support but failed to get to my desk. Let's get it done this year."

The Williams Institute, which studies sexual orientation law, released a study last year showing a non-discrimination law would protect 160,000 gay and transgender Missourians while costing about $40,000, or 2.5 of the Missouri Commission on Human Rights' annual budget.

Nixon is the first sitting governor to raise the profile of workplace discrimination based on sexuality or gender identity, according to PROMO, Missouri's leading LGBT activist group.

"We share the governor's vision of creating a better Missouri reflective of the needs of the next generation," says A.J. Bockelman, PROMO's executive director. "Increasingly, that generation knows and respects the challenges of the LGBT community and wishes to see the community reflected in the broad diversity that already makes up our great state."

House Bill 615 filed with the Missouri Legislature adds sexuality and gender identity to the Missouri Commission on Human Rights.

Continue reading for the full text of the bill.