Why Chouteau's Landing Matters: The Slow Decay of One of St. Louis' Oldest Neighborhoods 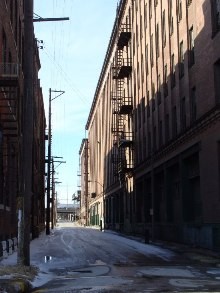 Hidden away just south of the Arch lies Chouteau's Landing, a commercial district cut off from view by the elevated lanes of Interstate 55 and the Poplar Street Bridge. While only encompassing a total of a dozen city blocks, the area preserves some of the last vestiges of the original St. Louis street grid and the types of buildings that flanked the Mississippi River prior to construction of the Arch. Walking the narrow streets of Chouteau's Landing is a walk back in time to the earliest decades of the nineteenth century, when the river -- not Highway 40 -- was the main avenue of commerce and immigrants flocked to St. Louis in search of opportunity.

Chouteau's Landing has been in the news a lot in the last year, and not for the right reasons. What had been an excellently preserved collection of turn-of-the-century warehouses is being threatened by a series of fires and demolitions that are chipping away at the historic integrity of Chouteau's Landing. The district represents great potential for redevelopment, but only if it comes in time. The events of the last several years show that such vision is needed now. Let's take a look at some of the losses as well as some of the remaining gems of this neighborhood. 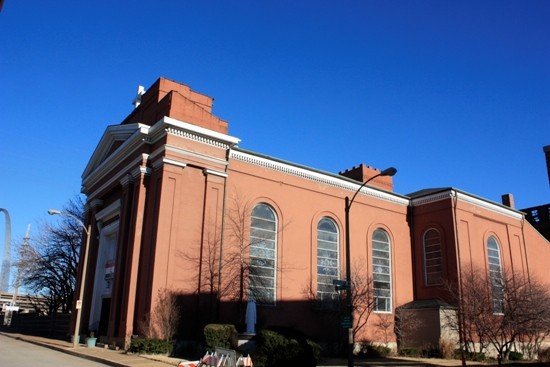 While Chouteau's Landing is now dominated by old warehouses and factories, at the beginning of the nineteenth century, the neighborhood was filled with thousands of immigrants, including an ever expanding German Catholic population. Responding to the need for a German language church, the Diocese of St. Louis commissioned the construction of the second Catholic parish church in St. Louis. Completed in two phases, in 1844 and 1861, the Franz Saler-designed temple sits in the shadow of I-55, its original congregation long since moving to other parts of the city.

Originally named the Municipal Free Bridge, the city constructed the MacArthur Bridge to break the monopoly the Terminal Railroad Association held over the Eads Bridge. The railroad portion of the bridge still operates, but the infamous automobile deck has been closed since the 1980s due to its reputation for gruesome wrecks. Towering high above Chouteau's Landing, the bridge represents an era when over-engineering and strength dominated. 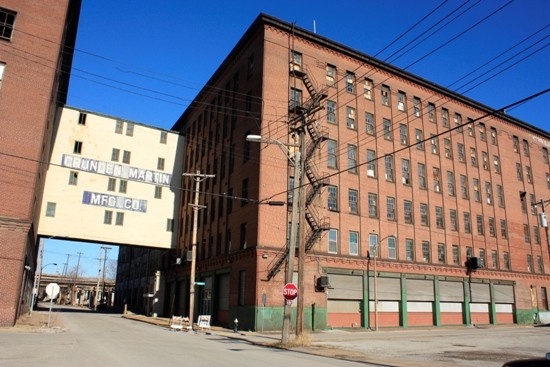 The sprawling complex of Crunden-Martin Manufacturing sits in the heart of Chouteau's Landing. Crunden-Martin closed shop in the 1990, after decades of producing wooden products as diverse as buckets to baskets. The complex has sat largely vacant since then, though some buildings have been rented out for storage. Misfortune struck when a fire swept through one of the buildings in 2011. Now threatened with demolition, the future of at least some of the Crunden-Martin complex is in doubt.

Continue to the next page for more on Chouteau's Landing 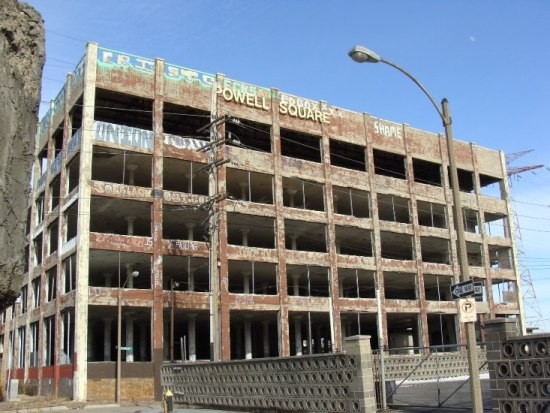 Now completely demolished, Powell Square represented St. Louisan's divergent views of abandoned buildings. Many saw the structure as a blank canvas that could have drawn talented artists from around the country. Others saw it as an ugly eyesore, sitting within arm's length of the intersection of I-55 and the Poplar Street Bridge. Serving a variety of functions over the years, including pharmaceutical and bag production, the site is now a grass covered field.

Heavily damaged by a fire in early December 2013, the Servco warehouse was at least partially occupied at the time of its destruction. Built in two phases, in 1902 and 1908, as the neighborhood transitioned from residential to industrial, its loss is just another strike against a long suffering corner of St. Louis.