After eight years in the Delmar Loop, Pizazz Furniture store is closing its doors.

Owner Dan Neenan, who's been selling furniture here and in Columbia for 40 years, says he's closing the store to spend more time with his grandkids.

"I've been doing this since I was 22, and it's been over 40 years," Neenan tells Daily RFT. "No one is interested in continuing this. It's time for me to move on." 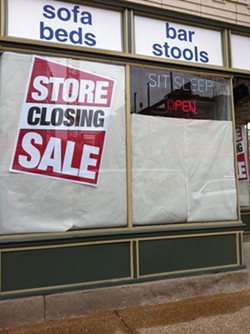 Neenan opened his first store in Columbia, Missouri, in 1974. When it became a success, he sold it to the manager, moved to St. Louis and started dealing furniture out of the Delmar Loop.

"This is the last hurrah," Neenan says. He's discounting his wares and plans to close the doors officially when there's nothing left to sell. "We are not opening up again."

Neenan says there's no word yet as to who will move into his vacant storefront, located on the eastern edge of the Loop near Thai Gaiyang Cafe.

Neenan doesn't like the word "retirement," but that's what he's headed for.

"My intention is to travel and write some poetry and spend time outside and maybe catch up on some books."