Locked-Up in "High Security Unit" and Not Told Why, Prisoners Hunger Strike for Answer 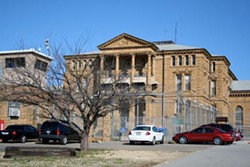 Inmates at an Illinois prison say they don't know why they are being held in a new high-security unit that is infested with mice, filth, and freezing cold temperatures, so they've decided to go on a hunger strike to protest the conditions. But the prison denies the poor conditions and says the inmates are lying to seek attention.

At the Menard Correctional Center in Chester, Illinois, about 60 miles southeast from St. Louis, fourteen inmates began a hunger strike on January 15. According to Tom Schaer, the Illinois Department of Corrections spokesperson, thirteen inmates have remained on the hunger strike as of Monday, January 19.

Letters from inmates sent to the Chicago-based Uptown People's Law Center and given to Daily RFT, describe the high security administrative detention unit as a cesspool of filth with no hot water or heat where inmates are isolated and prevented from access to mental health treatment programs. They have been there for about three months now.

"There are mice just running wild," writes inmate Michael Williams. "They have 20 guys using one pair of fingernail clippers with no cleaning in between uses, there is absolutely no mental health screening or evaluation, nor do any mental health staff even make rounds."

Most importantly for the inmates is that they say they have not been told the reason for their placement in the special unit.

"They won't tell anybody why they are in Administrative Detention, let alone give them an informal hearing to contest the undisclosed allegations," Williams writes.

Inmate Joseph Hauschild suspects he was placed in the special unit as punishment for filing several grievances and lawsuits against the Illinois Department of Corrections.

"I'm a jailhouse lawyer," he writes. "And [I] file/help other prisoners with their grievances and lawsuits. Because of that I was retaliated against and transferred to Menard and placed in the High Security Unit under Administrative Detention."

Williams is also a sort of "jailhouse lawyer," and in his letter he writes that while being transferred to Menard from another prison, his personal property was "allegedly lost," including three boxes of trial transcripts and legal research material.

Brian Nelson, prison rights coordinator for the Uptown People's Law Project, says the inmates have filed grievances asking for clarification about why they are placed there, but have not received any response. He also says that inmates filed a Freedom of Information Act request to get more information, but that request was denied.

"They want something in writing of how long they're there, why they're there," Nelson says. "They're not asking to be pampered or anything. They just want basic rights like the rest of the prisoners have."

But Schaer, the IDOC's spokesperson, says that the inmates' allegations are "utter lies."

Click on the next page to read why Schaer thinks the prisoners are lying...

"They are completely and entirely untrue," Schaer says. "The inmates want attention and now they're getting it."

According to Schaer, the units are clean, heat and hot water is plentiful, there are a few mice here and there, but that's to be expected in a rural area, and inmates are given regular mental health evaluations. As for the allegations that inmates are not told why they are placed in the administrative detention unit, he says that is false, too.

"They're told why and they're given clear directives," Schaer says.

So if everything in the unit is fine, why would the inmates want to go without food for several days in protest?

But the Uptown Peoples Law Center says that the situation is very real and ever since the 2013 closure of the controversial Tamms Correctional Center, a "supermax" prison where inmates were subjected to solitary confinement-like conditions, the Illinois Department of Corrections appears to be recreating mini-supermax prisons around the state by carving out special units such as the one at Menard, which does nothing to rehabilitate inmates.

See also: Nothing Left to Lose: Faced with supertough restrictions, inmates at Tamms protest by refusing to eat

"We want these guys to come out and be law-abiding and paying taxes instead of being screwed up in the head," Nelson says."We're already spending a lot of money to house them there. So let's do something so they're better off when they come out."