Sitting high on a bluff overlooking the Mississippi River, Bellefontaine Cemetery's Millionaires' Row is home to the city's greatest collection of grand neoclassical mausoleums graced with names that read like a who's who of prominent nineteenth-century St. Louis industrialists: Brown, Mallinckrodt, Anheuser, Busch, Griesedieck and more.

But two mausoleums stand out from the rest: the stately and traditional Lemp Mausoleum and, sitting directly across the road, the innovative and brash Wainwright Mausoleum. While the two tombs stare at each other peacefully today, at the turn of the twentieth century their two respective families were locked in a battle for the dominance of the St. Louis brewing market.

Brewing in St. Louis is almost as old as the city itself, but while many people today associate our city with the German-American brews, the first beer reflected the English character of early St. Louis; porters and ales prevailed. The influx of German immigrants in the 1840s changed the brewing industry forever, introducing lager beer that soon dominated the St. Louis beer market. 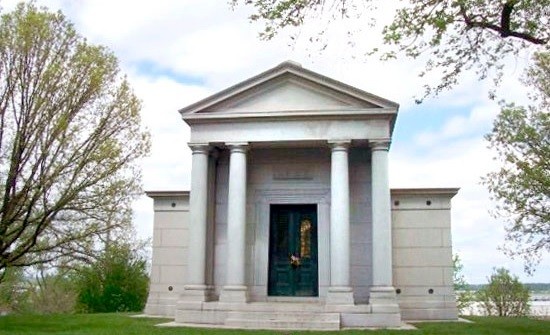 At the forefront of this German-American takeover of the beer market was the Lemp family. William J. Lemp Sr. grew the family's namesake brewery into the largest player in the local market before expanding nationally using refrigerated railcars packed with ice from the Mississippi River. From his sprawling brewery and mansion on Cherokee Street, Lemp represented the great American success story while still maintaining his German roots. It surely is not a coincidence that the beer baron's brewery in south St. Louis looks suspiciously like a European castle, nor is it surprising that the Lemp Mausoleum, while also the largest on Millionaires' Row, is rooted in tradition. The Lemp family had entered the upper class of St. Louis, and its architecture represents its role in its social and business establishment. The Lemp Mausoleum, like most of its neighbors, was built in the neoclassical style and looks like a Roman temple with its colonnaded façade and stern gray stone.

One of William Lemp's main competitors was Ellis Wainwright, perhaps best known today for constructing one of America's first skyscrapers, downtown St. Louis' Wainwright Building. But Ellis was also a brewer. In the late 1800s Ellis organized the St. Louis Brewers' Association, a merger of several of the town's smaller and less competitive breweries, in an attempt to fend off and compete with the growing influence of Lemp and other German brewers. Wainwright's battle was ultimately unsuccessful, and the St. Louis Brewers' Association and all of its component breweries declared bankruptcy. But the chance to relish victory for the Lemp family was short. The beginning of Prohibition doomed the Lemp Brewery as well, forcing William J. Lemp Jr. to sell the brewery's buildings for pennies on the dollar. He later shot himself in the family's mansion.

Wainwright, too, had his own family tragedies. When his young wife, Charlotte, died unexpectedly at the age of 34, he called upon the architect who designed his skyscraper, Louis Sullivan, to draft a tomb for his bride. Sullivan's fascinating design for the Wainwright Tomb, a simple cube with a half-sphere surmounting it and adorned with a stylized repeating snowflake pattern, was a direct architectural one-upping of Lemp's neoclassical mausoleum.

Today, the great turn-of-the-century confrontation for dominance of the St. Louis brewing market is largely forgotten, and the breweries once operated by the Lemps and Wainwright sit largely empty. But high on the bluff overlooking the Mississippi River, the two families lie in rest, facing off against each other for eternity.