Yesterday, the St. Louis Metropolitan Police Department released a snapshot of its overall crime statistics for 2013. The number that jumps out immediately is the 314 reports of rape, up 67 percent compared to last year's 185.

But, as proven from the city's "ranking problem," statistics can be misleading without the full picture: In this case, it turns out the FBI just updated its 1929 definition of forcible rape -- "The carnal knowledge of a female forcibly and against her will."

Applying that updated metric, Dotson says the number of 2013 rapes were "slightly down" compared to 2012. Overall, total crime went down 5.4 percent in 2013.

St. Louis experienced 120 homicides in 2013, up seven from 2012, but Dotson says he is still proud of the progress made this year.

Here are some highlights from the 2013 report, which you can read on the next page.

Dotson credits the consistent use of hot-spot policing to the decrease in crime in St. Louis last year. He's optimistic that a soon-to-be redistricted police force will bring violent crime -- like homicides -- down even further in 2014. 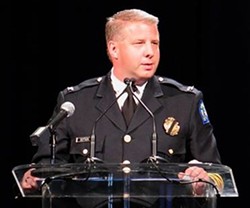 It's been over 50 years since St. Louis was divided into nine police districts, and that system will end come January 27 when the city shifts to six districts.

In an October blog post, Dotson wrote: "From every crucial point of view - customer service, officer safety, organizational efficiency, etc. - the old nine-district model no longer makes good, practical sense and there is now a pressing need to change it."

"They'll have the resources to go block by block and neighborhood by neighborhood to address specific problems," he says.

We've embedded the complete 2013 Crime Report release below. For an expanded presentation of 2013 crime numbers through November, click here. To see data by specific neighborhood, district and ward, click here.