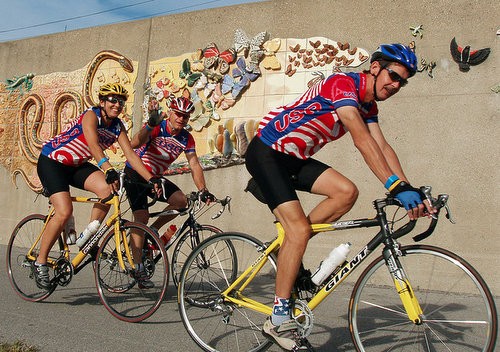 A new national bicycle registry is launching first in St. Louis to help bike owners get their wheels back after they've been stolen.

Anyone who's had a bicycle stolen knows the only thing worse is seeing the same bike for sale online days later. Bike Index, a registry founded in Chicago, records bikes' serial numbers, colors, style and photos into an online database to help bike owners prove what bike is theirs.

"People don't want to buy stolen bikes, but they don't know," Seth Herr, Bike Index's cofounder and lead programmer, tells Daily RFT. "Bikes all have identifying marks, so this is just a way of tying you and your ownership to that specific bike because if it's stolen, you can prove to the police that you owned it."

Bike Index isn't the first site to register bikes, but it is the first national registry to set up shop in St. Louis, named one of the ten fastest-growing cities for bike commuters. A successful Kickstarter campaign means Bike Index has the funds to hire programmers and link cities.

Herr says the major obstacle facing registries is that people don't know to register their bikes. That's why Bike Index is partnering with Trailnet, sustainable transportation advocates in St. Louis, to get bike shops on board, helping customers register as a standard part of buying a new bike or getting a repair.

So far, only Big Shark Bicycle Company in the Delmar Loop is ready for the registry.

"Since St. Louis has never had a working bike registration system, the Bike Index is particularly eager to provide the city with our services," Herr says.

St. Louis is the pilot city for Bike Index's registry, but more mid-size cities are on the way. Bike Index was founded in Chicago, but Herr says he wanted to get started in smaller cities without an overwhelming bureaucracy, like Pittsburgh and Burlington.

But why St. Louis first?

"You guys are just a little bit cooler than them," he says.