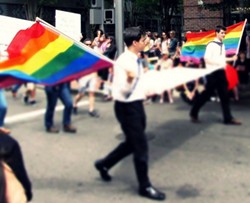 Filed Wednesday in the Cole County Circuit Court, the suit's four plaintiffs include representatives from the Missouri Baptist Convention and two other "pro family" advocacy groups.

They allege that Nixon's executive order violated the state's constitution, which defines marriage as between one man and one woman.

The plaintiffs' attorney, Mike Whitehead, announced the lawsuit in a press release Wednesday, alleging that Nixon "is trying to thwart the will of the people of Missouri." From the press release:

Nixon's recent executive order that permitted some same-sex couples to file a Missouri combined income tax return as "husband" and "wife" for 2013.

We're not sure why Whitehead put quotation marks around the words "husband" and "wife," since those terms appear nowhere in the 2013 tax forms that a married couple would file in Missouri. (There's just a space to fill in a spouse's name.)

"They have to show someone is harmed in this case, and that's where they're going to have a challenge," he says. "Who is actually harmed by couples filing tax returns jointly?"

If the lawsuit is successful, legally married gay couples would be forced to file taxes separately, as individuals instead of spouses. But this could create issues of how to split shared property or assets. "It creates a conundrum for gay couples," Bockelman says.

Other states with bans on same-sex marriage are dealing with these thorny tax issues as well.

"All the states that don't recognize same-sex marriage are currently dealing with this," says Guy Crouch, who worked as a CPA for years in California before moving to St. Louis three years ago. He cautions that forcing legally married couples to file tax returns as non-married individuals wouldn't just make Missouri's tax system extremely complicated -- it would "lack integrity."

"Missouri would be forcing those those gay couples to lie," he says. "Because they are not single. They are not. They are married."

Daily RFT has reached out to the plaintiffs and their attorney for comment, and we're trying to get our hands on the lawsuit itself.

The lawsuit seems to argue that by allowing legally married gay couples to file taxes jointly, Nixon's executive order has and will "expend public funds," which apparently would constitute damage to the four tax-paying plaintiffs.

The suit also argues that Nixon's statements about his own views of same-sex marriage -- like when he remarked, "I just don't think we should be treating people differently just because of who they are" -- have resulted in confusion that damages the state.

Also mentioned as evidence of "confusion" was a statement from Nixon in November, in which he said legally married same-sex couples could benefit from Missouri tax breaks reserved for married couples. That statement was apparently made in error and later retracted.

Such statements have resulted in confusion for members of the public, including plaintiffs, making it impossible to know exactly to know exactly the potential loss of revenue to the State of Missouri that may result from this [executive order]

We should point out that the attorney Mike Whitehead's use of the terms "husband" and "wife" in his press release isn't that odd after all; the IRS ruled that for federal tax purposes the terms "spouse," "husband and wife," "husband," and "wife," will include same-sex couples with legal marriages.

Basically, the terms all mean the same thing now (on a federal level).

What is odd, however, is the petition claims a legally married same-sex couple would have to "list one same-sex partner as 'husband' and the other partner as 'wife' on the Missouri combined return."

As we mentioned above, we can't find any place to list "husband" or "wife" on the MO-1040, the form such a couple would fill out. For that matter, the forms also don't mention the words "man," "woman," "gender" or "sex."