A former St. Louis police officer was charged with harassing a queer Tower Grove couple over the rainbow-colored U.S. flag hanging on their porch.

Jeffrey Leveque, 45, of north St. Louis County, faces a felony harassment charge for making verbal threats and posting a picture of the couple's home on Craigslist.

Leveque was last in court in September, when he pleaded guilty to stealing more than $1,000 of items from Home Depot, according to court records.

Police say Leveque was one of the two men who parked outside the home of Meg Hensley, 27, and her partner Kendan Elliott, 34, and yelled at them threateningly as they tried to go to work. Hensley told the Daily RFT afterward that the officer was angry the couple's rainbow-colored flag "defaced" the American flag. 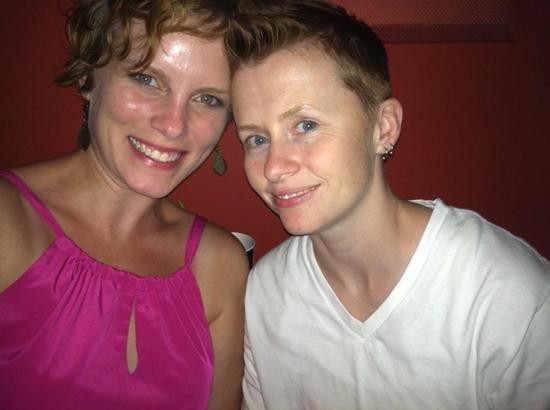 After Hensley called police, the men posted a picture of her house in Criagslist's "Rants and Raves" section, railing against the "carpet-munching cunt" couple.

"Obviously, this guy is watching us," Hensley told the Daily RFT in December. "For him to go online and guide people to my house and encourage other people to harass me is terrifying."

Hensley only learned of the Craigslist posting when a stranger found it online, came to her house and alerted her.

The Craigslist posting has since been removed, but here's what it said:

So the carpet muncher called the police. So offended you were. Who is the criminal? You deface the "American Flag" and upset that stated to you how un American you are. Well you make me sick everyday when you kiss your girlfriend good bye. Being a carpet muching cunt is one thing but our flag is another. Have some respect for our country if you have no respect for our Lord.