Getting Jason Segel to come to some strangers' wedding? Not yet -- but this St. Louis couple is doing its best.

After nearly ten years as friends, four years as a couple and a year and a half engaged, Lauren Stein, 25, and Chris Openlander, 24, are planning their summer wedding in St. Louis, and famous funny man Jason Segel is on the guest list, even though Stein and Openlander have never met him.

"Honestly, my fiance Chris and I, we just really enjoy him as an actor, as a performer, as a writer," says Stein, a second-grade teacher. "We've been watching him ever since he was in Freaks and Geeks. We just admire him."

Segel made his TV debut on Freaks and Geeks, a short-lived '90s program about life in high school that launched the film careers of several now-household names, including Judd Apatow, James Franco and Seth Rogen.

The high school connection is appropriate: Stein and Openlander met at Ritenour High School as a junior and sophomore, respectively. When Stein realized Openlander had never seen Freaks and Geeks, she let him borrow her DVD set -- and the rest is history.

"He obviously loved it; the humor was right up his alley," Stein tells Daily RFT. "Over the years, [Segel] has definitely been one of those actors where, if he was ever in a movie, there was no doubt we were going to go see it."

Segel has been keeping this Spanish Lake couple busy going to the movies. Since his hilarious stoner role in Freaks and Geeks, Segel has starred in major blockbusters, including Knocked Up, Forgetting Sarah Marshall, Get Him to the Greek, This Is 40 and The Muppets. On TV, he has played the lovable Marshall Eriksen on How I Met Your Mother for nine seasons.

Something about Segel's dry, awkward, goofy characters resonates with Stein and Openlander, so the couple wants him to join 150 friends and family at their wedding. To attract his attention, the pair wrote a poem titled "Ode to Jason," a rewrite of "'Twas the Night Before Christmas." (Read the full poem after the jump.)

Written in about ten minutes during Christmastime, the poem tells the story about Stein dreaming that Openlander brought Segel to their wedding as a surprise gift to her:

"He was dressed in a suit and looking so stylish," the poem says about Segel. "My knees started to buckle, and I was acting kind of childish./His eyes -- how they sparkled! His smile -- how dreamy!/And the beard on his chin made me feel like of steamy..."

Openlander is sending Segel a letter to explaining his influence on the couple "so we don't look too crazy," Stein says. "I think this probably isn't the craziest thing he's ever received."

Certainly, their poem is downright tame compared to this outright solicitation posted on YouTube:

If Segel does show up, it will be a huge surprise, not only to the future Mr. and Mrs. Openlander but to their families, who have no idea they're reaching out to him.

"We're not crazies, so we don't actually think he's going to show up," Stein says. "But if he just acknowledges us or writes us back, that would be a success. Just him seeing it and maybe writing something back -- I think that would be, for us, the goal."

Continue to read "Ode to Jason," a rhyming wedding invitation to Jason Segel. 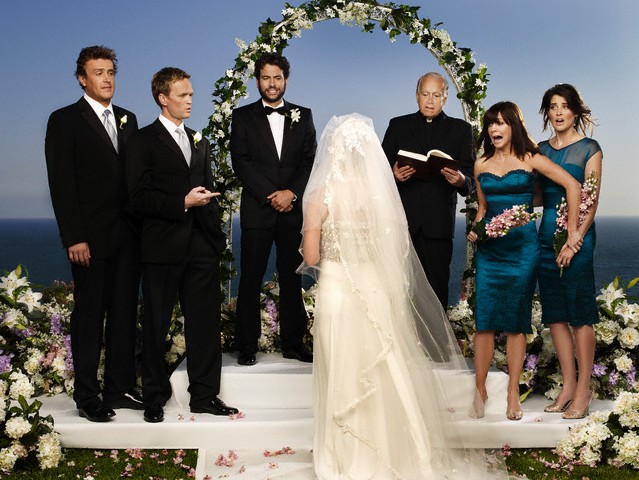 "Ode to Jason," by Chris Openlander and Lauren Stein

'Twas six months before our wedding, when all through the place Everyone was so busy, that it seemed like a race. The save the dates were all sent, with tenderness and care, But we forgot someone special who we hoped would be there.

Christopher and Lauren were all snug in their bed While visions of Jason Segel danced in Lauren's head: "I would love to see him there, he's my favorite person." "We will get him there," said Chris, "and that is for certain."

Later that night there arose such a clatter. Chris sprang from his bed and yelled, "What is the matter?!" He shook his head, knowing she must have had a dream. Lauren sat up and wondered, "What does this mean?"

"He was there!" she exclaimed, with excitement and glee. "Chris, you saved the day, and you did it all for me! In my dream, he was there. He didn't need much persuasion. I saw him and knew: That must be St. Jason!"

"He was dressed in a suit and looking so stylish. My knees started to buckle, and I was acting kind of childish. His eyes -- how they sparkled! His smile -- how dreamy! And the beard on his chin made me feel kind of steamy..."

Chris spoke not a word but knew what he must do. "I will get him there," he thought, "and I'll do it all for you!" Chris jumped out of bed and turned with a jerk, He opened up his laptop and got right to work.

He sprang to his lab to start writing this thing. "I really hope this poem will pull his heartstrings." Lauren heard down the hall as Chris walked out of sight, "I will get Jason there on that special Saturday night!!"