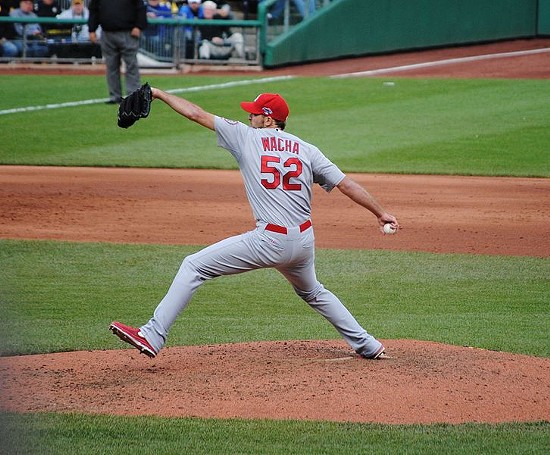 Congratulations to St. Louis Cardinal pitcher Michael Wacha, who won more than 40 percent of the votes in the battle for the title of 2013 St. Louis Person of the Year.

The "award," based on a voter poll on Mayor Francis Slay's website, was awarded to the only human being in the top five. Wacha beat out the city-county unification group Better Together STL, long-awaited furniture retailer IKEA, the St. Louis Symphony Orchestra performance at Carnegie Hall and aviation giant Boeing.

Wacha, a top 2012 draft pick for the Redbirds, rose to prominence in the battle to the 2013 World Series. Just a year out of Texas A&M University, he was quickly adopted as a St. Louis darling when he threw a no-hitter for more than eight innings against the Washington Nationals before an infield single tipped off his glove, allowing a player to get to first base.

Wacha pitched six innings of World Series Game 2 against the Boston Red Sox, a game the Cardinals won 4-2, making him the seventeenth-youngest pitcher in league history to win a World Series game.

Only the orchestra performance came close to toppling Wacha's victory with 36 percent of the vote. Better Together STL earned 12 percent and IKEA earned 6 percent.

Boeing, who recently settled a deal with Washington State workers to keep 777x production in the Pacific Northwest, came in last with 3 percent of the vote.

Wacha joins an elite group of "people" of the year: The 2012 person of the year was the re-opening of the Peabody Opera House. In 2011 Randy Grimm and Stray Rescue won for their work on behalf of stray pets. In 2010 another baseball player, Stan "The Man" Musial took home the title. And in 2009, the reopening of Highway 40/I-64 won.