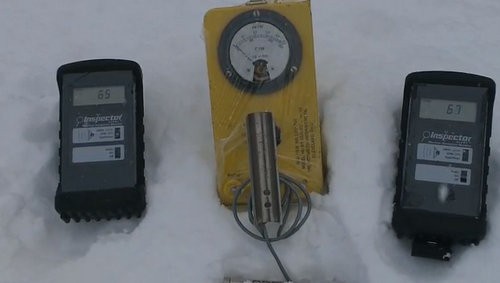 Before you jump into foot-high snow banks, make a snow angel or catch a flake on your tongue, Michael Janitch has something he wants you to see.

The south St. Louis man has been measuring radioactivity levels on his own in his back yard, and when it snows, he says, levels jump up dramatically.

"You know, getting these high of readings...80 is really high, it really is, which means there is something in the snow that's causing a radioactive return," he says while using his Geiger counter in his yard.

Those numbers he's referring to measure the number of radioactive atoms that decay per minute, measured in "counts per minute." A count of 100 per minute is considered the safety threshold, because any reading over 100 without clear evidence of radioactive material is highly unusual.

On a nice day, Janitch's back yard measures 30 counts per minute, mainly because there are mild amounts of radioactive material in topsoil all over the world. But when the snow falls, those levels increase.

On December 14, Janitch conducted two ten-minute tests with his Geiger counter and found radioactivity levels between 74.2 and 81.4 counts per minute.

Janitch's findings have many worried that the 2011 meltdown of the Fukushima Daiichi reactors in Japan is sending radiation to the United States through precipitation.

"I'm not a conspiracy theorist, but it's obvious to me that this is bad," says Geoffrey Skoniki, who keeps his own online following writing about weather and geological phenomena. "Obviously, this is a negative effect of the Japanese Fukushima disaster. The plumes of radiation emitted from the reactors are hitting the jet stream and landing here, in my very own hometown. What else could possibly be causing this?"

Janitch, who goes by Dutchsinse online, has posted photos and video of Sunday night's snowstorm but no radioactivity measurements yet.