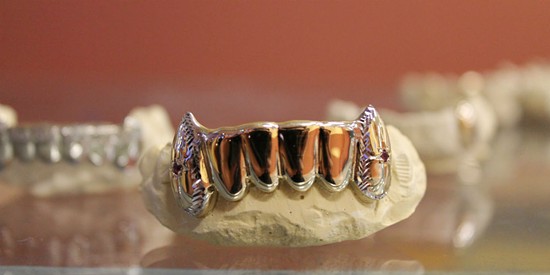 West Said's original plan for the space on Delmar Blvd. and Hamilton Ave. was to open up a cell-phone store. But then he had an epiphany.

"I woke up one day and was like, 'I should make this a grillz shop.' There's cell-phone stores everywhere," Said (pronounced sy-eed) says.

STL Grillzz is the only official grillz shop in the city, according to Said. And given the fact that Said also does taxes as a side business in the shop, it might be the only grillz/income tax shop ever.

The Delmar shop has only been open for about a month, but Said has been making and selling grillz on and off for several years. He first got into the business in 2006, shortly after Nelly's 2005 hit song "Grillz" came out and gave some mainstream attention to the style of jewelry that had been around since at least the '80s.

"When Nelly had that that song, everyone was wearing grillz at that time. It was a hot commodity," Said tells Daily RFT. "I got picked up with the trend, and that's how I learned about gold teeth."

Said had just graduated from Hazelwood West in 2006 and started making grillz out of a friend's store. He learned the technical side -- building molds, melting gold and creating designs. Other commitments led to him taking a break from devoting himself full-time to grillz, but he got back into it over the last few years.

He got his grillz business going by advertising his wares on Instagram. He markets his work heavily on the site and has more than 13,000 followers on his two accounts -- STL Grillzz and ATL Grillz. Said says he first started marketing his grillz to an Atlanta audience because of their popularity in the South, but he recognized the demand in St. Louis and decided to focus on his home city as well. That's what led him to open up the shop on Delmar Boulevard. 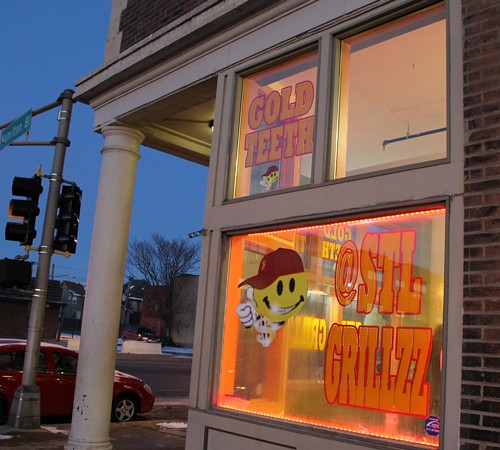 On the counter of STL Grillzz are several examples of Said's handiwork, which range from about $50 to $70 per tooth, depending on if you want 10 karat or 14 karat gold. And for people who really want to show off some bling, they can get some diamonds thrown in, too, which obviously raise the price up quite a bit, sometimes into the thousands. 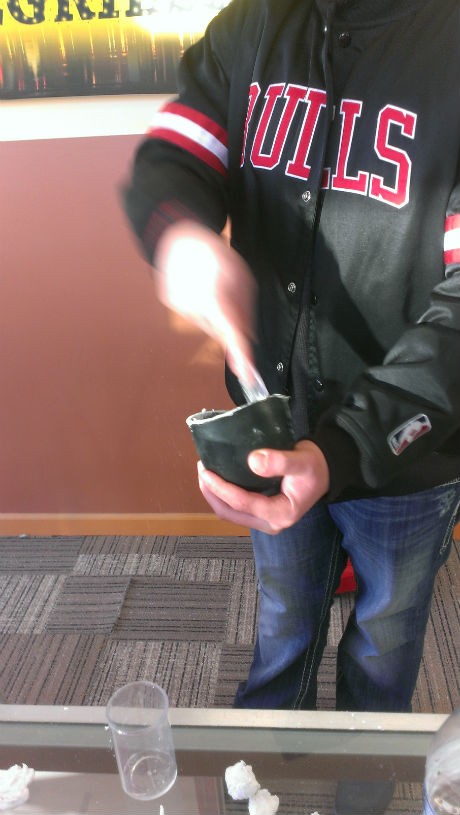 Said gained a large following through social media, but he's also benefiting from the fact that grillz seem to be enjoying a resurgence in popularity as the most commercial pop stars are sporting gold teeth more often these days.

"It's not like they stopped wearing them since then. It was still here, it just wasn't mainstream like with Miley," Said says, referring to the singer. "Now it's getting back to how it was."

Said picks up a glittery two-piece grill from off the counter. Click on the next page to see the Miley grill...

"This grill right here is actually called the 'Miley Cyrus.' We named it after her because she wore that style first," he says.

Miley has her grill, but so do other megastars like Rihanna and Beyonce, and that has made the trend go from what has commonly been considered a black "urban" style to one sought after by everybody.

"I thought it would be mostly black guys, but it's not," Said says of the people who come into his shop. "It's totally shown me different. I have white ladies, white guys all the time. They're the most curious ones. They'll see some nice work and be like, 'Oh this is pretty cute.' And then when they start seeing Beyonce and Victoria's Secret models -- they all got gold teeth now, too, showing off in music videos. And people be like, 'Yeah, I want that.'"

Arab Americans are also getting in on grillz, says Said, who is of Palestinian descent, and he has made grillz with Arabic lettering and Palestinian flag colors for a few of his Arab American customers.

Grillz are multicultural now, but it's the ladies who are really helping to make the scene get big again.

"I'd say there are five females for every two male customers," Said says.

With his new shop on Delmar, Said hopes to make a place where people from all over come to St. Louis for grillz. So far, he's doing a pretty good job. An NFL player came in the other day for a set, and Said is currently working on a piece for Miss USA 2010, as well as a few girlfriends of NBA players.

"You watch -- this place is gonna become a tourist attraction," Said says.

Correction: It was earlier written that Said is of Lebanese descent. However, he is of Palestinian descent.