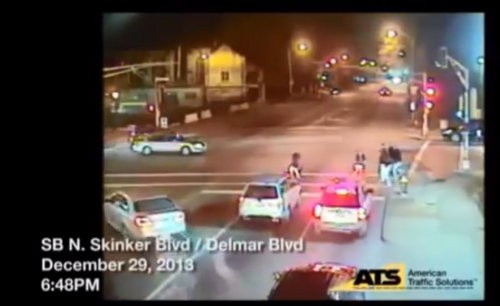 Red-light cameras caught a shooting in the Loop Sunday evening that left a 21-year-old man in critical condition with gunshot wounds in his back.

An unknown shooter in a black SUV opened fire on the car stopped on southbound Skinker Boulevard around 7 p.m., hitting the driver and causing him to back into the SUV before hurling forward and crashing into westbound traffic on Delmar Boulevard.

St. Louis Metropolitan Police are now searching for the suspect seen in the video crawling out of the back of the vicitm's car like something out of The Fast and the Furious, checking that the coast is clear and hobbling away. He stole a car and fled, leaving a 9mm and illegal narcotics behind, police say.

Red-light cameras at the intersection of Skinker and Delmar boulevards caught the incident, starting after the gunshots. The victim's car swerves into oncoming traffic on Delmar Boulevard, sending pedestrians scrambling for the sidewalk and pushing two other cars to run the red light to escape.

Police are asking for help identifying the man in the video who runs away from the scene. Tips that lead to arrest are eligible for a $1,000 reward. Call the anonymous line at 866-371-TIPS with information.

Continue reading for a play-by-play breakdown of the shooting, with images from the red-light-camera footage. Here's what you can see on the red light video of Sunday night's shooting:

Police say the incident started when a gunman stepped out of a black SUV going southbound on Skinker Boulevard and started shooting into the car in front of him. The driver under fire reverses to hit the suspect's car. Then the victim steers east into oncoming traffic on Delmar Boulevard:

Pedestrians scramble for the sidewalk, and two other cars run the red light, driving across Delmar Boulevard to escape the shots.

Then some pony-tailed dude crawls out of the car, leaves his drugs and gun behind and steals a car to get away. In the video, you can see him run west on Delmar to escape.

Continue reading for the full statement from St. Louis Metropolitan Police. Here's what police released about the shooting:

Incident: Assault 1st (Shooting), Stealing of a Motor Vehicle, VMCSL Location: 6100 block of Delmar Date/Time: 12/29/13 @ 19:30 Victim: 21-year old black male Suspect(s): Unknown Officers responded to the above location and observed the victim in the driver seat of a vehicle suffering from gunshot wounds to the back. The victim was conveyed to a local hospital and listed in critical/stable condition. Investigation revealed that the victim was stopped in traffic on southbound Skinker just north of Delmar when a black SUV stopped behind him. A passenger exited the SUV and fired numerous shots into the victim's vehicle. Following the shots, the victim backed his vehicle into another vehicle, causing an accident, before traveling south and turning east on Delmar, where the victim's vehicle collided with two more vehicles. An unknown passenger exited the victim's vehicle and fled the scene. Illegal narcotics were located inside of the victim's vehicle. The investigation is ongoing.