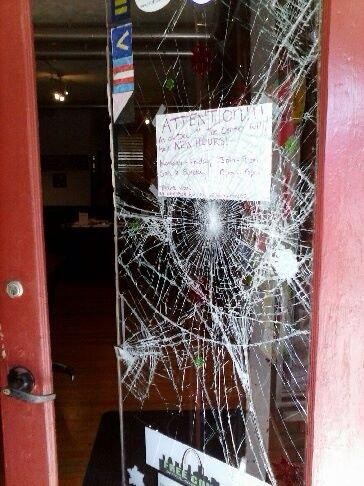 Gay and straight alike, St. Louisans are stepping up to help the LGBT Center in the Mangrove after thieves broke through the glass front door and stole a television and gaming console.

The smash-and-grab job doesn't appear to be an anti-LGBT hate crime, but volunteers were afraid of the thieves motivations, especially after two men threatened a queer Tower Grove couple at their home and online.

"This theft situation has just shown how strong our community is and how much people are willing to give back," says Center volunteer Amy Colvin.

Word of the break-in spread quickly online, drawing offers of support from neighbors and businesses. The next day, someone dropped off a new television to replace the one stole, and later that night, Just John's gay bar donated a portion of their profits to the center.

Another supporter is already at work replacing the glass in the front door.

Now Hartford Coffee Company down in Tower Grove South is promising to match donations to the center, up to $1,000.

"People are really wanting to support our community," Colvin tells Daily RFT. "It's created a lot of traffic in the center, and awareness."