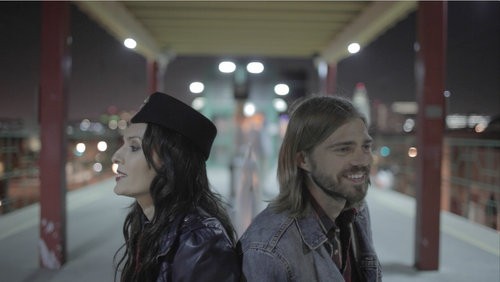 After seven years in California, Nathan Sutton is returning to his hometown to debut his award-winning first feature film Autumn Wanderer this weekend.

"I feel like St. Louis has always supported its own no matter what it is," says Sutton, who grew up in Affton, attended Lutheran South High School and graduated from Webster University. "I love St. Louis, and I wanted to bring my movie back and get some of that love."

Sutton's movie is very small, very indie -- exactly the type of film St. Louis doesn't see a lot of, except during festivals. Shot for only $12,000 in only 12 days, Sutton and his wife play the lead roles in a story revolving around Charlie, who is struggling to deal with his father's schizophrenia and the possibility of inheriting it himself when he meets the girl of his dreams.

"There are not a lot of movies like this that ever make it through the midwest unless it's a major, major deal," he tells Daily RFT. "I wanted to be able to bring it back and show people something they may not be able to see. Maybe because I'm from St. Louis, they'll go out of their way to see it."

Sutton uses two starkly different cinematographic styles to tell his story: regular Charlie is shown in long, still, stagnant shots where action deliberately occurs out of sight, but when love-interest Nia (played by Sutton's wife, Elisha Skorman) comes on screen, things seem to go back to normal. The cameras switch from stationary to handheld, giving viewers the illusion they're there, falling in love side-by-side with the couple.

The choice is strange, though interesting enough to be forgivable.

"I wanted to make people work a little bit to understand what's going on," Sutton says. "We didn't want anything to feel normal until [Nia] got on screen because his imagination is where he felt safe."

Even Sutton's mom gets a quick cameo: The Oakville-native is shopping for a Jonathan Franzen novel in the bookstore where Sutton works. As her character shops, Sutton's character reads a book real-life Sutton wrote for her.

If you go, be prepared for a slog. Sutton purposefully moves his story at a snail's pace. "I didn't think people would like this kind of movie because it is so slow," Sutton says. "We were constantly surprised because people seem to care."

Skorman, Sutton's wife and co-lead, agrees the pacing adds to the film's message and story.

"Some people are going to get that, and some people aren't," Skorman says. "Whether it is good or bad, they're taking. We live in such a fast paced society; this movie is just like, sit down and chill and watch it."

Both Sutton and Skorman will be in St. Louis to screen their film at 7:30 p.m. December 28 and 29 at the Winifred Moore Auditorium on Webster University, with a Q&A to follow.

Skorman says she's excited to come back to St. Louis. Her favorite part of the Lou (besides visiting his family, of course), is the City Museum.