Salvage City: Fortune Teller Bar's Sam Coffey Gets a TV Show, But Is It Good for St. Louis? 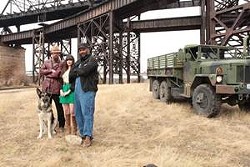 Sam Coffey knows the key to dumpster diving: If you wait 'til it gets to the dumpster, you're too late.

Long before bulldozers demolish St. Louis' blighted industrial buildings and pour the remains into dumpsters and landfills, Coffey and his crew pick through the remains looking for something they can clean-up, transform and sell.

"We're trying to keep those items out of the landfill and use them to keep the history alive," Coffey tells Daily RFT. "By the time they get to the dumpster, the pieces would most likely be far beyond any kind of repair or reclamation. The items we're taking out of the buildings are items that go into landfills even if the building is fortunate enough to go through renovation."

"The majority of people, when they look at an abandoned building, they don't see beauty. I do," says Coffey, who is also co-owner at the Fortune Teller Bar. "A lot of these buildings are lost in history. My goal is hopefully people will see these items and start looking at urban decay differently."

Coffey and his crew -- designer Mia Brown, junkyard giant Chris Totter and loyal German Shepard Hektor -- don't just take any ol' item for his reclamation. A carpenter by trade, Coffey is careful not to remove anything required to keep the building standing so he won't cause a collapse.

"We're looking for things that are not required (structurally) or historically significant or important to that building's future," he says. "I'm not going after staircases or mantels or stained glass windows."

A home run for Coffey is something that doesn't meet modern building codes, like decades-old theater seats, which no longer fit the girth of modern Americans.

In the long-vacant Sun Theater -- which is now being renovated -- Coffey found a fire door in the projectionist's booth that won't meet modern fire codes. He took it to his factory and built it into a table, which now lives in KDHX 88.1 FM's new space.

"We're going after very specific items that we can visualize a future as something else," Coffey says.

But is that future good for St. Louis? Coffey reacts to accusations his show makes River City look like a decayed hellhole after the jump. If all this is starting to sound like trespassing and stealing, it is.

But Coffey says he doesn't feel like a criminal.

"We have a different mission in mind, and that is to bring awareness to these buildings," he says. 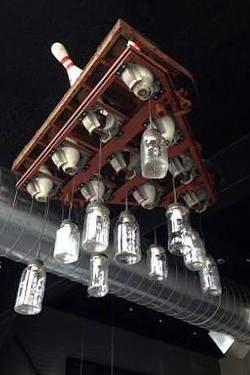 Coffey's show has already ruffled a few feathers. Even before it airs, promos paint River City as Detroit, Jr., abandoned by industry and left to drown in blight. St. Louisans worry portraying their city as mid-death rattle on national television is harmful to the city's image.

"I could not disagree more," he responds. "I think they're going to see St. Louis in a more positive light. When people who've never been to St. Louis see this show, I think we do a pretty good job conveying how beautiful the city really is."

For Coffey, that beauty comes from River City's urban decay -- not so much the aesthetics of the city's blighted buildings, but from the opportunity.