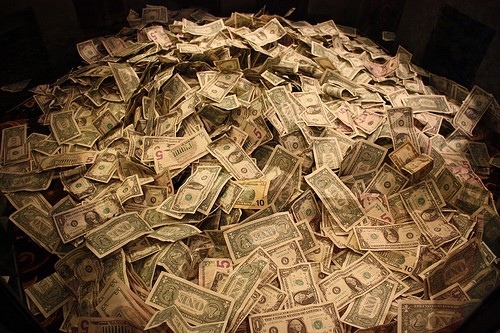 Payday lenders have such a good racket, even judges are confused about why it's legal.

A ProPublica investigation published in the Post-Dispatch Sunday details nightmare tales of Missourians taking out small loans - sometimes as low as $100 - and having to pay back that amount several times over. But far from this being a practice that breaks the law, current legislation in Missouri and other states actually condone and even protect it.

The story's main subject is Naya Burks, a St. Louis woman who borrowed $1,000 from AmeriCash. The high interest rate wasn't a secret at signing for the loan, but needing the money, Burks agreed to pay $1,737 over six months.

But after Burks fell behind on payments, AmeriCash sued her in 2008, when her debt had grown from the initial $1,000 to $4,000. The lending company was able to garnish Burk's wages, but $25 a week wasn't enough to keep up with a 240 percent interest rate, so the debt kept growing even as she kept paying.

In Missouri, there is no limit on the interest a loan can accrue, even after a judgment is realized in court, the report says.

Burks is just one of several thousand people each year who get sued by payday lenders. In Missouri, lenders have sued 47,057 customers between January 1, 2009 and September 30, 2013. And if borrowers don't show up to court, they risk going to jail.,

Of course, sometimes people just need a loan and will agree to insane terms because they need it.

"It's really an indentured servitude," St. Louis circuit court judge Christopher McGraugh told ProPublica. "I just don't see how these people can get out from underneath [these debts]."

The lenders, meanwhile, are making money.

World Acceptance Corporation of Missouri, for example, has 76 locations across the Show-Me state and has sued 3,739 of its customers during the above mentioned time-frame. But whatever they're doing, it works, because their profits have almost tripled over the past four years, according to financial statements on the company's website.

Noble Corporation, which has sued 4,275 Missourians since 2009, hasn't had as much success as World Acceptance, but revenue has shown steady profit over the past four years.

And although Heights Finance Corporation, which has sued nearly 3,000 Missourians since 2009, is a private company, its CEO, Timothy Stanley, was named the chairman of a top lending company lobbyist group in 2012, indicating he's not exactly running his company into the ground.

According to the National Consumer Law Center, Missouri scores a "D" for its laws to protect borrowers of predatory loans.

The grade is based on state laws pertaining to limits put on a lender when it comes time to collect. Basically, how much of your wages, car, home, personal valuables, and bank account can they take.

The only category Missouri scores not horrible in is wage garnishment protection. State law says a lender can only confiscate 10 percent of a debtor's wages, although 10 percent for many people is hard to swallow and is what AmeriCash took from Burks each week.

Nonetheless, Missouri has a "B" in this category. The only states that prohibit a lender from taking your paycheck are Pennsylvania, South Carolina, and Texas. North Carolina also protects wages, but only if the borrower has a family.