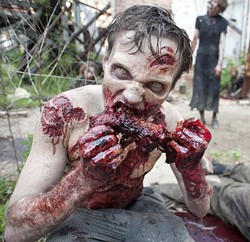 College students across the country join the annual Humans vs. Zombies game, but after just a few years, Missouri State's has grown into one of the largest in the country.

More than 500 students carry Nerf guns to play tag with a post-apocalyptic twist: Shoot students dressed as zombies to live another day; get tagged, and you're a zombie yourself.

But college professors are more afraid of students with guns than they are of zombies. A professor put his class on lockdown and called 911 in October when he saw students carrying Nerf guns on campus, according to the Springfield News-Leader. Police also received several calls to the campus non-emergency number to report the guns.

See also: So You Wanna Be a Zombie? One day at Ghoul School

Students are forbidden from painting their Nerf guns to look like real guns and from playing inside, but the game goes on all hours of the day. In low light, campus officials say, it's hard to tell the difference between a Nerf gun and a real gun -- especially for law enforcement.

"That can end in disaster, and that's ultimately what we're trying to prevent," says Chad Holmes, the faculty adviser for the student group that organizes the game.

Holmes' group is already planning next year's game and hopes to sign up 1,000 students to play.