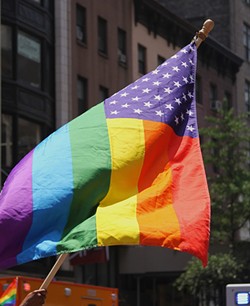 Neighbors and activists are taking a stand against the homophobic bullies who harassed a queer Tower Grove East couple last week over their gay pride flag.

Meg Hensley, 27, says she and her partner were leaving for work when two men in a truck pulled up and angrily yelled that their stars-and-stripes rainbow flag "defaced" the American flag. When the men parked in front of her house, Hensley called police and left, hoping that would be the end.

"It's not the first time I've been called a gay slur," says Hensley. "I live in the midwest. It happens."

Then things got weird. The bullies posted Hensley's address and a photo of her front porch on Craigslist in a post raging against the "carpet-munching cunt" couple.

"Obviously, this guy is watching us," Hensley tells the Daily RFT. "For him to go online and guide people to my house and encourage other people to harass me is terrifying."

Hensley wouldn't have known about the Craigslist rant except for a worried good Samaritan who used the post to find Hensley's house and leave her a warning note.

"She said, 'You need to look at Craigslist, I saw a dangerous post online about you,'" Hensley remembers.

Neighbors and LGBT activists were outraged. Plans for a rally emerged, and Sayer Johnson at Metro Trans Umbrella Group organized a small demonstration on South Grand. About 15 people braved the cold to hold signs and rainbow flags showing the homophobic bullies were outnumbered.

"It feels good to know my neighbors are looking out for me," she says. "I don't know what this guy is capable of. We had a mix of LGBT community people and neighbors coming out and showing that kind of behavior isn't tolerated in Tower Grove."

Hensley says she and her partner, Kendan Elliott, a 34-year-old transgender man, are still afraid of the angry energy the homophobic men are directing at them.

"It's scary. I don't know who else is going to find my house," Hensley says.

Continue reading for the text of the now-deleted Craigslist rant against Hensley and Elliott. 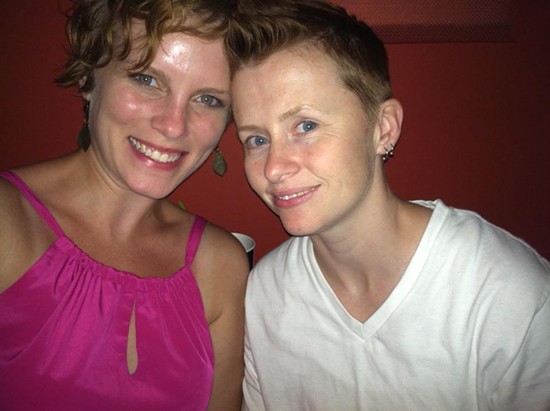 The Cragislist post has been flagged and removed, but here's what it said:

So the carpet muncher called the police. So offended you were. Who is the criminal? You deface the "American Flag" and upset that stated to you how un American you are. Well you make me sick everyday when you kiss your girlfriend good bye. Being a carpet muching cunt is one thing but our flag is another. Have some respect for our country if you have no respect for our Lord.