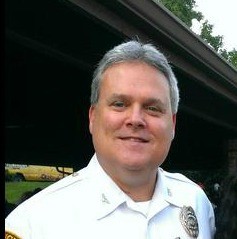 Updated with a copy of Fitch's internal e-mail to the department.

St. Louis Country Police Chief Tim Fitch announced today that he is planning to retire in February. Fitch has been chief since 2009.

In a message posted to his blog, Fitch writes that it was "not an easy decision" but that he's been offered an opportunity to start his own public safety consulting business.

St. Louis County Executive Charlie Dooley and Fitch have very publicly butted heads of late, so observers could be forgiven for thinking there may be a connection. But in an e-mail to the department, Fitch asserts that no one is "forcing me from this job."

Here is what Fitch wrote in an e-mail to the county police department staff:

To My County Police Family,

Please excuse the informality of email, but I wanted you to hear this directly from me before the news media reported it. Earlier today, I notified the Board of Police Commissioners of my intent to retire in February 2014.

There are not many people that can say they have lived their dream. My dream was to be a St. Louis County police officer. In 1983, that dream was realized. I certainly never expected to become the chief of police. I've always considered myself as a street cop that was fortunate to become the chief. This profession is in my blood and always will be.

You should know that nobody is forcing me from this job. With that said, this still is one of the hardest decisions I've ever had to make. I've always said that when you reach your retirement points and have something you want to do - you should do it. It's time for me to follow my own advice.

Mrs. Fitch deserves to live her own dreams. She's always lived mine, so now it's her turn. Our new business in the private sector will provide us with the flexibility we desire to carry out the next part of our lives.

You should know that the vast majority of our citizens are supportive of the work you do. It's with their support that you'll be successful. Please continue to take care of the good people out there and they'll always take care of you.

The St. Louis County Police Department has an extremely bright future. Crime is at historic lows and our agency continues to grow in size and influence due to your ethics, professionalism and dedication to duty. It will always be home for me and I'll be rooting for you all the way as a private citizen and county resident.

Finally, let us never forget our nine fallen officers. They died serving our community and their families still suffer that loss each day. God bless them, as well as you and your family.

Thank you for the incredible privilege of serving as your chief.

And here's what Fitch posted on his own website:

After having the privilege of serving the citizens of St. Louis County for more than 30 years, I have notified the Board of Police Commissioners of my intent to retire in February 2014.

It's been said that the best time to leave is when you still love what you are doing. That's how I can describe my entire career. Retiring from this position was not an easy decision. However, I've been given an incredible opportunity to start my own public safety consulting group. My family and I are looking forward to the next part of our lives in the world of private business.

I truly believe that the men and women serving at the St. Louis County Police Department are the best in the nation. Due to their hard work, crime in the past five years is at historical lows. It has been an honor to work side-by-side with these professionals since 1983 and to have served as their Chief since 2009. We have worked hard to internally develop many well-qualified commanders that can easily take the helm of this proud agency.

Finally, I want to personally thank the Board of Police Commissioners, County Executive, County Council and the people of St. Louis County for allowing me to serve for so many years.

As the St. Louis Post-Dispatch points out, Fitch has been at odds with Dooley over the dysfunctional Board of Police Commissioners, and wanted to involve the FBI to investigate some controversial, multimillion dollar county contracts, including the one awarded to health department employee Edward Meuth, who committed suicide in September after it became clear he was under investigation.

There is a filing with the Missouri Secretary of State for a limited liability company called Fitch Consulting created in September of this year, which could indicate that Fitch has been planning his exit for some time. View the paperwork here.

Mayor Francis Slay reacted to the news on social media:

Chief Fitch was strongly aware that crime pays little attention to political boundaries. I wish him well in his retirement. #fgs

Daily RFT left a message with the department for Fitch, we'll update as we learn more about the announcement.