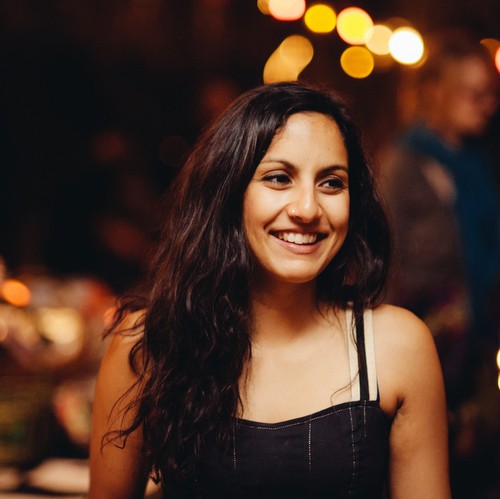 If you plan to sled on the fresh powder at Art Hill tomorrow, look up. Those flecks of white in the trees aren't snow.

Artists will hang 1,000 poems from trees near the Saint Louis Art Museum Saturday for St. Louisans to pick, stamp and send to strangers and friends in an art installation designed at bringing the power of poetry to the people.

"Authorship isn't very important with us," Nezam says. "I like to think of it as a really interesting practice in letting go and experiencing artwork in that moment. It's all just kind of throwing the seeds out in the wind and letting them scatter."

Nezam and her partner, Henry Goldkamp, are both known for interactive, engaging public art. Nezam is the founding director of STL Improv Anywhere, and Goldkamp set up Fresh Poetry Ink, where he wrote poems for strangers on sidewalks.

"We think everyone is a poet," says Nezam. "Everyone's life is really interesting -- that's something both of us have learned. A lot of people don't realize they have amazing things to share and say and express. [Goldkamp] always says the poetry is coming out of their mouths more than it is from his typewriter."

But as schedules fill and people get older, finding time to engage with art gets harder.

"That's why you have community artists who say, 'Hey, you should still create, and I'm going to have you build it into your schedule,'" Nezam says.

The new project is risky, especially as forecasts for Friday night show snow and sleet, but Nezam says bumps in the road are all part of a larger artistic concept.

"We don't actually know what to expect," says Nezam. "In the end, so much of the project is based around the beauty of happenstance anyway."

Volunteers will be on hand with envelopes, stamps, a phone book and plenty of hot chocolate to help participants mail their letters and stay warm.

To pluck a poem, go to the southeast corner of the Saint Louis Art Museum between 9 a.m. and 5 p.m. Saturday.