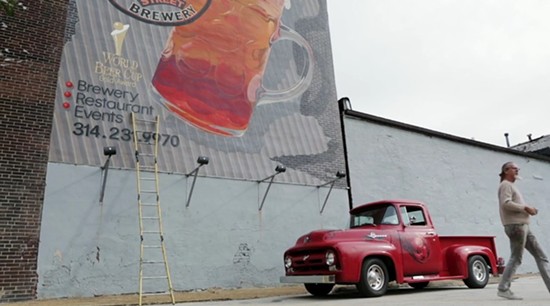 Two St. Louis filmmakers have started a film series that showcases people who are rarely in the spotlight, but probably deserve to be.

Once Films, a filmmaking and advertising team headed by Greg Kiger and Chris Ryan, is behind the "Spotlight Series," which is made up of short films that profile small local businesses.

"The point of the Spotlight Series is to kind of shout from the rooftops that there's a lot of cool stuff going on in our town, there's a lot of interesting characters, and people doing amazing stuff," Kiger tells Daily RFT.

So far, the series has two films available for viewing on its website. The first, "Bob the Baker," focuses on the owner of Carondelet Bakery, the oldest bakery in St. Louis. The second, "Signs," showcases Phil Jarvis, a sign painter who does his work by hand and has created some of the most recognizable signs in the city.

"A lot of times I think people are really thrilled to know there's an old bakery in town or a guy who does hand-painted signs," Kiger says. "Our thought was, 'Let's put them in a heroic light.' They really deserve that, and in a lot of ways they are keeping some craft or artisan way alive."

Ryan adds that by showcasing individuals who run unique businesses, viewers can also learn about interesting characters -- the kind one only knows by living in a certain neighborhood for a long time.

Click on the next page to see another video and to submit a suggestion to the filmmakers...

"One of the interesting things about any city is all the unknown stuff that for the most part you have to live in that neighborhood all your life or be around it all the time to know they exist," Ryan says. "So we're just trying to let people know about the little pockets of interesting characters around town."

Kiger and Ryan are small business owners themselves. Having worked as professional photographers for about twenty years, the two started Once Films three years ago. They now do multimedia advertising work for an array of companies. But they do the "Spotlight Series" without charge as a way to promote small businesses and try different storytelling techniques they can't otherwise do with paying clients -- although that's not always the case after clients see the films.

"With these films, we get to play with the art form," Ryan says. "But this more experimental approach has also inspired clients, who see something they might want to emulate."

Kiger and Ryan are looking for more subjects to make films about, so they encourage any suggestions.

"If you know somebody in your sphere of friends or acquaintances, share that with us, and we'll put them up on a pedestal where they belong," Kiger says.