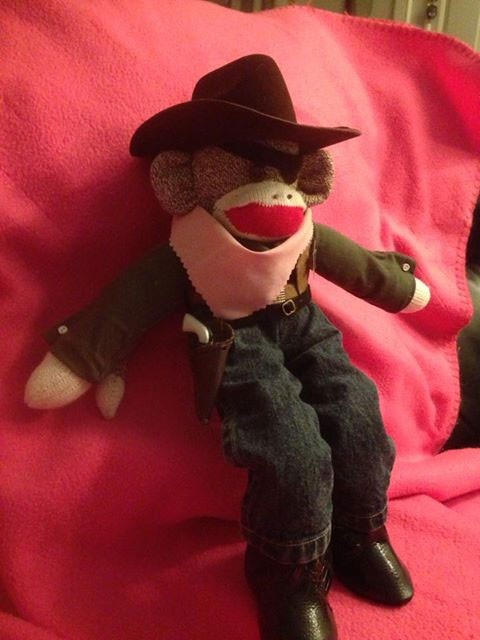 A TSA agent at Lambert-St. Louis International Airport proved she takes the rules very seriously when she confiscated a toy gun from a Seattle traveler's cowboy sock monkey.

The plushy sock monkey named (and dressed) after Rooster Cogburn, the tough, one-eyed marshal played by John Wayne in True Grit was holstered with a two-inch pistol, courtesy of his creator, Phillis May, who sews and sells the toys.

"She took my monkey's gun," May tells Seattle TV station King 5. "Rooster Monkburn has been disarmed, so I'm sure everyone on the plane was safe."

May repeated her conversation with the TSA agent to Seattle media, and it goes something like this:

TSA agent: (Holds up bag.) Whose is this?

TSA: (Pulls out teeny pistol.) This is a gun.

TSA: If I held it up to your neck, you wouldn't know if it was real or not.

TSA: I'm going to have to confiscate the gun, and I'm supposed to call police.

PM: Really? You're kidding me, right?

In the end, the TSA agent took the gun but didn't call police. The TSA responded to the issue Monday, saying in a release: "TSA officers are dedicated to keeping the nation's transportation security systems safe and secure for the traveling public. Under longstanding aircraft security policy, and out of an abundance of caution, realistic replicas of firearms are prohibited in carry-on bags."

So maybe next time, May should just check her toys' weapons like the rest of us.

"I understand she was doing her job, but at some point doesn't common sense prevail?" May said.