Larry Conners on His New Role: Yes, I'm Doing Commercials; No, They Won't Be Goofy

Since his career as a KMOV-TV (Channel 4) anchor ended in May, all the news about famous St. Louis anchorman Larry Conners has been about his battle to get back on the airwaves despite a one-year ban written into his contract.

With six months left to go, Conners is leapfrogging all limitations, partnering with local businesses to do radio and TV spots to lend his image and credibility to products he trusts.

"If they had a bad reputation, I wouldn't do it, I don't care how great the deal was they gave me," he tells Daily RFT about throwing in his lot with John Beal Roofing. Conners will start recording television commercials and radio spots for the roofing company on Thursday.

John Beal Roofing commercials tend to have a campy, silly bent to them, but Conners says that's not the direction he'll take. 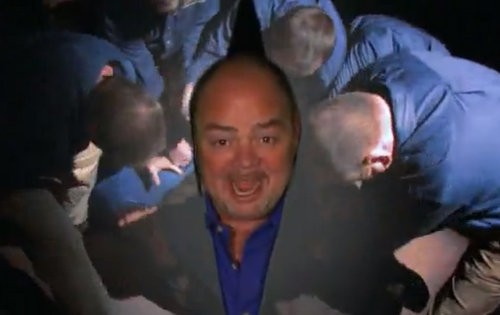 "That's not knocking what they've done," he says. "Believe it or not, I can be a fun guy. But they want to move to a different level."

That means we probably won't see Conners beating up a raindrop or sticking his shiny dome through a green screen like the company's head, John Beal, used to do in the company's commercials.

"Get Larry Conners out there acting goofy? That doesn't work," says Conners.

(Daily RFT respectfully disagrees, and we present Exhibit A:)

Conners has never endorsed a business before, mostly because his role as an anchor barred any outright promotion. "As a TV anchor, you should not be doing that," he says.

But Conners says his days as a straight newsman are over.

"Folks have heard my voice, and I've been blessed to have it recognized, for good or bad, throughout the years," says Conners, who has nearly 40 years of experience in the St. Louis market. "If I return to TV, it's going to be more commentary. I'm not going to go back simply as an anchor anymore."

See also: Larry Conners Plans KMOV Exposé; Enemies Have "No Idea What They Are Facing"

The company has agreed to give Conners editorial control over all his spots.

"He's got such a good reputation," says Gregg Buffington, general manager at John Beal Roofing. "We're doing different types of commercials with him. We're going in a new direction. It's perfect timing to bring him in with some of the new things we're doing here."