5 Maps That Will Change The Way You Think About Missouri 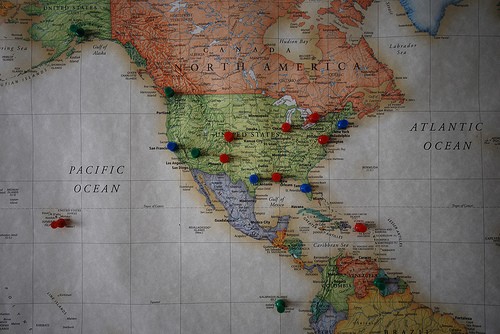 The art of cartography is not dead. As Internet news becomes more visual and personalized, interesting maps seem to go viral once a week.

These online maps aren't meant for navigation -- we have GPS for that -- but whether they're created by geographers, sociologists or idiot British people, there's a lot to be learned about Missouri.

Here are five lessons about Missouri we learned from viral online maps:

1. No one in Europe knows where we are.

Buzzfeed asked fifteen British people to label all 50 states on a map for Thanksgiving, and only one person even came close to identifying Missouri (albeit with a question mark next to it). Other Brits labeled us as Detroit, North Carolina, Nebraska, a question mark and "No Fucking Clue."

2. We really live in the Land of the People with Dugout Canoes, in the city of St. Famous Warrior.

Cartographers Stephan Hormes and Silke Peust created this map to remind people of what's behind the names of their home states and towns. Joplin is really "The Little Persecuted," and Illinois technically means "People who Talk Normally."

3. St. Louis is an African American Southern town surrounded by suburbs -- not a big city. A sociologist divided all American communities into fifteen different types, and Missouri has an impressively diverse showing with at least eleven of those communities represented. Curiously, the map labels Kansas City as a big city community but not St. Louis, which is designated as an African American Southern town -- the poorest of the fifteen types.

When one cartographer decided to dissolve the 50 states and redraw them with equal populations, he quartered Missouri, throwing St. Louis into a state called Sangamon, the Potawatomi Indian name meaning "where there is plenty to eat." Sagamon moves north from St. Louis to Peoria and Cedar Rapids. Kansas City is in its own state called Nodaway with Lincoln, Nebraska, and Des Moines, Iowa. Springfield is in Ozark, and Joplin is in Muskogee.

5. We speak South Midland English, with a smattering of Ozark.

Long Island University's Robert Delaney wanted to map out who pahks their cah on Havahd Yahd and who calls all sodas Cokes. Here in Missouri, we're mostly speakers of the South Midland dialect, which means we say that we're a'going to the store and we use Elizabethan English words like "ragamuffin" and "reckon." We're also more prone to use the word "sorry" to mean pathetic. Example: I reckon that a'reading this map is a sorry way to spend my day.