Cardinals Trade David Freese; What Will Imo's Pizza Do Now? 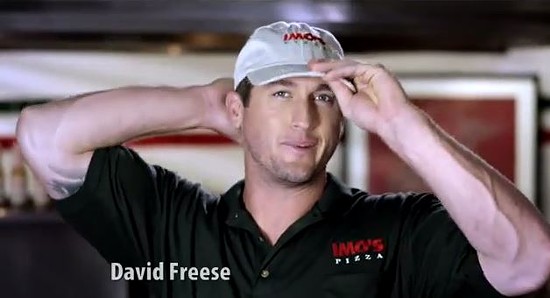 Who will sell the square beyond compare?

Imo's Pizza signed a three-year contract with Freese in June for radio, print and digital spots (plus bonus free pizza for Freese), but president Margie Imo offers no clues about the company's future relationship with the all-star.

"We have been quite pleased with our association with David," Imo says in a statement released Monday. "We wish him only the best in California. At this point, he is still under contract with Imo's, and we have made no decisions as yet about his future with us."

Freese is featured in an upcoming commercial about Imo's 50th anniversary next year, according to the St. Louis Business Journal.

Imo's is still promoting the David Freese special: a fourteen-inch pizza for $14.

(And no, the Freese pizza can not be traded.)

When Freese was traded to the Angels, his new teammate and former Cardinal MVP Albert Pujols texted him a warm welcome, according to the Associated Press. Freese's response was a perfect reference to their 2011 World Series win:

"Remember what we did the last time we played together? Let's go try to do that again."