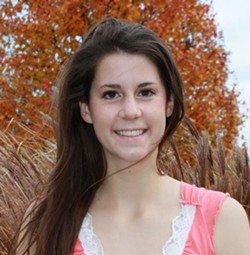 A notoriously tough biology professor in Union is threatening to drop a scholarship student athlete from her class if she misses one lecture to play in this weekend's national volleyball tournament.

Hannah Leslie, a nineteen-year-old from Washington, has missed three classes at East Central College because of away games, each time presenting an official excuse from the school's athletic director. Despite negotiations with the school's administration, professor Parvadha Govindaswamy says she'll drop Leslie from her biology class if she has one more absence -- even if it's for the national college volleyball championships in Ohio.

If Leslie has to drop the class, she'd lose her athletic eligibility and would have to delay graduation by a year.

"Hannah is just doing what she's told to do," says Sonia Leslie, Hannah's mother, just hours before Hannah left the championship tournament to make it back for school on Friday. "She's in the middle here. She's a quiet, shy person and very uncomfortable being in the middle."

"Had we known this was an issue earlier, we would have done something different," Sonia says.

For example, the volleyball team left for one game at 8 a.m., causing Hannah to miss a class that ends at 8:20 a.m. If Hannah had known twenty minutes would make the difference between playing in the championships or staying at home, Sonia says, the team would have waited for her class to end.

Administrators at the college offered to send another student to Friday's lecture and Skype it for Hannah to ensure she still heard the material, but Govindaswamy refused. The school's vice president personally drove her to the airport immediately after class on Thursday so she could make it to Toledo in time for Friday's game.

"I feel like the athletic department and the administration have given some very good offers," Sonia says. "They've compromised so much. It is just unfortunate that a compromise wasn't made."

"When Hannah made it to the nationals, she told me she'd never been a part of anything this big," Sonia says. "Her twin sister usually got the recognition."

Rather than take another biology class with Govindaswamy, Hannah is transferring to Missouri State, where she'll be with her sister.

"East Central College recruited her and gave her a scholarship to play volleyball but is punishing her for doing well," Sonia says. "She has not missed a lab. She has not missed a report. She's not in threat of not passing the class. It has nothing to do with her academics whatsoever."