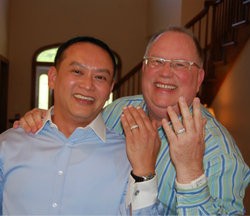 Back in July, Daily RFT reported on Jourdan and Kirk who were -- as far as we knew -- one of, if not the, first local, same-sex couple to apply for a marriage-based green card after the demise of the federal Defense of Marriage Act.

There's a happy update to the story -- Jourdan has been approved!

"Getting the approval and getting the green card was just a huge relief," Kirk tells us. "It means we can plan our lives now."

As we reported back in July, the couple met while Kirk was living in Singapore. They have been together for thirteen years and were legally married in Iowa in 2010. Because Jourdan is not an American citizen, he had to spend an equal amount of time out of the country as he did in it, so the couple lived apart for half the year.

"When this happened, that I have to be away from him for six months, it was so painful," Jourdan told us at the time.

But as soon as the U.S. Supreme Court struck down DOMA, all of that changed. As soon as Jourdan's green-card application was submitted, he was allowed to stay in the U.S. All they had to do was prove to an immigration official that their marriage is "legitimate" by submitting to a fifteen-minute interview.

Kirk (the couple asked Daily RFT to use only their first names) says they saw another same-sex couple in the waiting area when they arrived for their interview, so they're definitely not the only ones in the area.

"Fifteen minutes on the dot, and the guy shuffled us out the door. It was interesting that he asked us pretty much what we expected to get," recalls Kirk.

The only question that made Kirk and Jourdan raise an eyebrow was when Jourdan was asked if he had ever worked as a prostitute -- their attorney Jim Hacking told them he'd never heard that question in an interview before.

"[The interviewer] didn't do anything wrong," says Kirk. "But I don't know. It was kind of an unusual question."

The state of Missouri may not acknowledge their marriage, but the federal government now does. And according to Hacking the process couldn't have gone smoother for his clients.

"All immigration cases should go as seamlessly as this one did," he says. "The Obama administration has made it a priority. They've been backlogged and denied this basic right for a long time."

Jourdan can get back into the job market and then apply to become an American citizen in three short years.

"It means that we have a life together now, guaranteed," says Kirk.